SAUSALITO, Calif. (KGO) -- The sea lion rescued from Highway 101 in South San Francisco on Tuesday was more than 400 miles from home.

Veterinarians at The Marine Mammal Center in Sausalito are caring for the 10-month-old pup, who they've named, Kid.

They said Kid was previously tagged by the California Wildlife Center in Southern California.

Marine Mammal Center veterinarians diagnosed Kid with moderate malnutrition and a minor laceration to the left hind flipper. They said Kid likely separated from his mother early and wasn't ready to forage on his own.

"Although a bit malnourished, this young sea lion pup is very active and feisty so we're hopeful with immediate supportive care that he makes a full recovery," said Dr. Cara Field.

On Tuesday, Kid was spotted by drivers on Highway 101 near Interstate 380. They corralled the animal until the CHP could arrive.

At approximately 8:33 am Officer Pereira #21222 received call of a sea lion in distress on us-101 northbound, south of the South San Francisco exit. Upon arrival The sea lion appeared healthy and uninjured. The sea lion was taken to Peninsula SPCA for treatment. pic.twitter.com/Wzbuo6L5S5 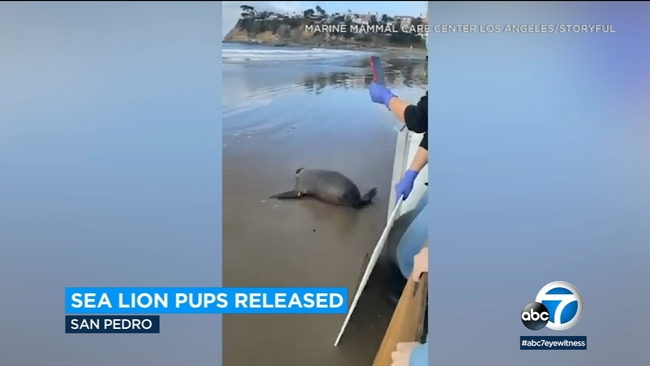