Who can beat Donald Trump? Exploring the question of 'electability' in Democratic primary -- Chasing California 2020 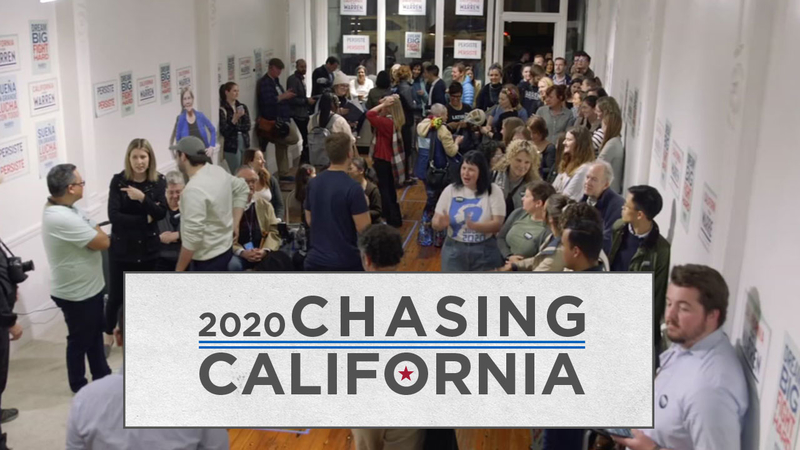 SAN FRANCISCO (KGO) -- Throughout our reporting on the Democratic presidential primary, there's been one unifying question we hear from nearly every single California voter: Which candidate can beat Donald Trump?

It's the question of so-called "electability" -- and it's no secret that it's largely dominated this election cycle (New York Magazine, after all, dubbed this "the Electability Primary.")

While, for many Democrats, this is clearly a major factor as they make their decision, the idea of electability is also the most elusive. It's something we explore in our latest "Chasing California" episode: "The Electability Primary."

CHASING CALIFORNIA 2020: A look at Mayor Pete Buttigieg's fight to win the moderate vote in California

"Electability is a myth," Marcy Stech, a San Francisco-based Democratic strategist and former VP of Communications for Emily's List, told ABC7 News. "It's a meaningless word. There's no data to show what makes a candidate electable."

According to Stech, many of the questions surrounding electability stem from pre-conceived biases, such as the question of whether or not a woman can beat President Trump. "I think electability is a code word. It's a euphemism for biases that we might not actually admit ourselves outright," she explained.

Stech pointed to Massachusetts senator and presidential candidate Elizabeth Warren, who consistently talks about her own electability while on the campaign trail. Despite her similarities to fellow progressive candidate Senator Bernie Sanders, an ABC News/Washington Post poll shows that 3% of Democratic voters believe Warren can beat President Trump versus 30% who believe Sanders can.

"I would put my confidence in a woman like Senator Elizabeth Warren, who has a track record of winning," the former HUD secretary said during a stop at Warren's campaign office in San Francisco. "She's the only person on that stage that has defeated an incumbent Republican within the last 30 years. There's a reason for that."

But Warren is not the only person facing this "electability" question. Michelle Forbes says she's worried the country would not elect a Democratic socialist like Bernie Sanders.

"It's not to say that Bernie is a bad guy or any of that," Forbes, who is from Sacramento, said. "I'm just saying I don't know if the country is ready for that far left of a candidate in the general election, and we have to vote out Trump."

Sanders responded to similar concerns in a one-on-one interview with our sister station in Los Angeles. "What we are trying to do in this campaign is push ideas that exist all over the world. In Germany, in Canada, in Denmark, in Sweden, all over the world," Sanders said. "Health care is a guaranteed right for all people, is not a radical idea. Making public colleges and universities tuition free so all of our kids, regardless of income, can get a higher education, not a radical idea."

South Bend, Indiana Mayor Pete Buttigieg has also faced questions of his electability for his same-sex marriage. A video went viral the day of the Iowa Caucus showing a voter reconsidering her vote for Buttigieg after learning he was gay. We recently asked Buttigieg what he would tell voters who saw that video and questioned his electability.

"So you'll never get everybody, but here's my experience: I came out during a re-election in my community in Mike Pence's Indiana. While he was governor, I got 80% of the vote," Buttigieg said.

"The reality is, if you give Americans the chance, overwhelmingly, they're gonna vote based on how their lives are going to be different. It's about their lives, not mine," he continued. "And we will continue to reach and recognize that America's at its best, including in elections, when the American people overcome old habits and old prejudices."

"The idea that if voters vote for the person who excites them the most, that's the best thing that they can do, not voting for the candidate who they think can win in Michigan or win in Iowa or win in some other state that is not California," Stech said. "Voters have one job to do on Tuesday, and that is to vote for the candidate who gets them excited, who's going to get them out of bed on election day in November."

"If we spend too much time focusing on other people's biases and whether or not this question of electability, because we heard it from a pundit on national television," she added, "We're not doing our job as voters."