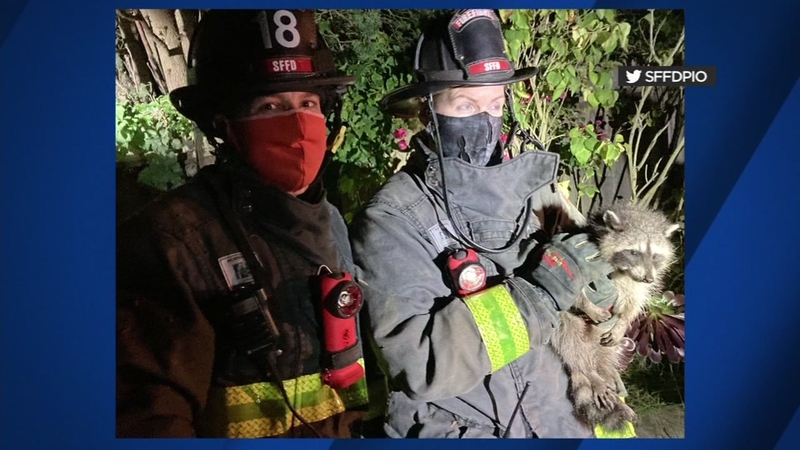 SAN FRANCISCO (KGO) -- A baby raccoon was saved after getting itself into a precarious situation, but it's giving us some cuteness overload in the process.

Neighbors called for help after hearing loud cries at 15th Avenue and Santiago Street, in the Sunset District. San Francisco firefighters were summoned after San Francisco Animal Care and Control was unable to free the raccoon, which had wedged itself in between a tight V-split in some tree branches, the department said.

Firefighters were given a quick briefing on calming and comforting the raccoon before going up.

It took the team just a few minutes to get the baby raccoon down, and made for a very memorable photo.

2/3 On how to calm and comfort the Raccoon. They then went to work freeing the baby raccoon from a V split in a large tree, where somehow the raccoon had become wedged in. After a few minutes of rescue work, the raccoon was free only to clutch and hold onto the firefighters- pic.twitter.com/YWbyhUg3Jj

"In light of recent events, we have named him - FREEDOM," the fire department said from its Twitter account.

'Freedom' the raccoon is now in the care of San Francisco Animal Care and Control "and will be released to continue its life, with a few new friends who will always be there if needed," the department said.