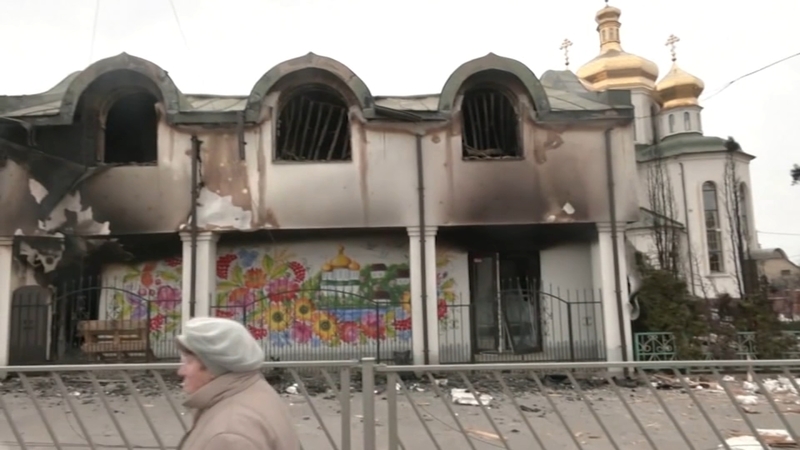 Here in the Bay Area, many are focusing on what can be done to show support to Ukrainians.

Tuesday night, the San Jose City Council decided not to end their relationship with a city in Russia.

They're thousands of miles apart but San Jose, California and Yekaterinburg, Russia are sister cities.

Tim Quigley is President of the San Jose Yekaterinburg Sister City program and is Chair Emeritus of Sister Cities International. He explained what a Sister City partnership is.

"This is a formal contract between two cities that the councils pass and the mayor sign. What is different is that the relationship is solely community leaders, community volunteer leaders," he said.

Though the San Jose City Council was set to discuss severing ties with its Russian sister city, they instead voted unanimously to send a letter that expresses support to the Russian people who are pushing back against their government and also call for overall peace.

San Jose City Hall was lit up with Ukrainian flag color Monday as the city says it is cutting ties with its Russian Sister City.

"Severing a relationship or offering to severe a relationship sends the wrong message," said City Councilmember Pam Foley, at the Tuesday meeting, "That isn't peace."

Quigley says he condemns what the Russian government is doing in Ukraine, but says that the communication that is currently happening between San Jose and Yekaterinburg is crucial.

"For me the value of these links, these important sister city links are just for this moment," he said.

With most social media blocked to Russians, he says that in many cases he is a main source of news to friends there.

"You can call them on the phone," he said, "But you can tell that you're being monitored."

Still not, everyone wants the city to have any relationship with Russia.

One woman spoke during public comment at the Tuesday city council meeting.

"Putin's Russia is the same as Hitler's Germany," she said, "If you support having any relationship, please think about what side of history you're going to be."

Quigley tells ABC7 News he understands where that speaker is coming from.

"I am with her, it is horrific what they are undergoing," he said, adding that many in Russia and the local Russian community also agree.

"We have to be careful not to demonize the everyday people," Quigley said.

He says he hopes to help build a bridge between the local Ukrainian community and the local Russian communities who support Ukraine.

Discussions like the one the City of San Jose had are not over in the South Bay.