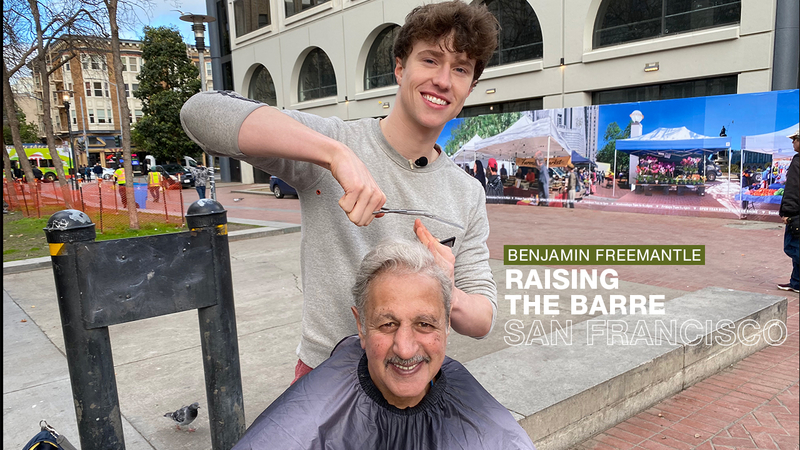 SAN FRANCISCO (KGO) -- Benjamin Freemantle is not a barber by trade. For him, cutting hair is a way to spark joy and spread kindness.

For the past two years, Freemantle has hit the streets of San Francisco, offering free haircuts to make life a little nicer for those who are down on their luck.

Many who sit down in Freemantle's chair are homeless. Others stay in single-room-occupancy hotels or shelters near the Civic Center. It's not where they live that matters to Freemantle. It's who they are.

For Abner, a quick trim and a friendly chat are a welcome break from the harsh realities of life. When you are homeless, or on the verge, a sidewalk trim is as close as you get to a fancy salon. You can't blame Abner or anyone else lined up for a free cut for not recognizing their hairdresser.

The street corner may be just a few blocks from where Freemantle works, but it is a world away. He is a street barber by day and a celebrated dancer by night.

But when the Vancouver native came here eight years ago as a student, he could hardly afford a big city haircut.
He tells ABC7 News anchor Kristen Sze, "I just started cutting my own hair, actually lied to my friend first to cut his hair saying I had done it before just cuz I wanted to try it and I think I could do it. Thank God I could," he said.

Freemantle knows appearances matter, whether on stage or in the outside world.

Indeed, 10 minutes in Freemantle's chair has left Benny Fettah with not just a new look, but also a new outlook. Fettah says gratefully, "I think you guys make our day, especially in this area, the Civic Center."

Freemantle's customers may not pay him in cash, but they give him plenty of hugs and appreciation. He hopes this is just his opening act.

Freemantle has been lobbying San Francisco to allow him to hold a monthly gathering of volunteer service producers who could give the homeless a wide range of free services, from haircuts to showers on wheels to clothing. So far, his idea, called the New Day Project has not gotten the support or attention from the city. But he vows to keep trying.

For his efforts to make the lives of those less fortunate a little better, one snip at a time, we salute this ABC7 Star, Benjamin Freemantle.

This not just a graceful human. This is a compassionate human. Can’t wait to introduce you to ⁦@sfballet⁩ principal dancer ⁦@Benfreemantle⁩. He’s building a #BetterBayArea one haircut at a time! ❤️👍👏 pic.twitter.com/xBpv7DCI0f