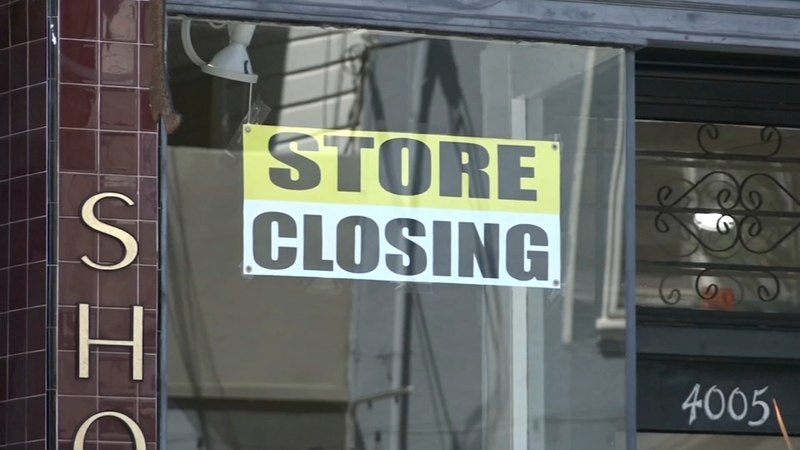 SAN FRANCISCO (KGO) -- Nearly 50% of the San Francisco's small businesses are still closed, according to data from the city's Chamber of Commerce compiled in May.

It's unclear how many of those closures are temporary or permanent.

Rabat, a retail clothing boutique has been home to San Francisco's Noe Valley for the past 49 years.

"In a funny way, it seems as though the pandemic is the reason we're closing," Saniya said. "When in fact it's almost the reason that we're still here."

RELATED: SF businesses owe up to $400 million in rent, but proposed legislation could offer major relief

Rabat's owner was able to negotiate a lower rate during the pandemic and has been leasing month-to-month since August. But now that the state's economy is fully reopening, the charming store is bracing to be forced out, expecting an increased demand for retail space.

"At the peak of it we had over 51% of our small businesses closed and now we're starting to see some of that come back a bit," said Rodney Fong, the SF Chamber President.

According to Fong, the city's retail industry was hit the hardest.

RELATED: Why some Bay Area businesses are closing as CA nears fully reopening its economy

"Most of my competitors are out of business," O'Leary said.

The women's clothing store Morning Lavender off Union St. is listed as permanently closed, according to Google. Azalea Boutique off Valencia in the Sunset is also listed as temporarily closed.

But for O'Leary, business hasn't been better since retail reopened in San Francisco in March.

"We can't stock the stores fast enough; we really needed this," said O'Leary, who lost 75% of her business over the past year.

"The last year business has been really bad," she said. "Not good at all."

Tong is barely able to sustain her business with a limited lunch rush. She's constantly asking herself, when will it get better?

Fong says the majority of restaurants were hit hard across the city. But delivery and takeout saved many of them, in addition to the shared streets program that allowed businesses to maximize their outdoor storefront parking with additional seating.

"85% of the restaurants we surveyed say they won't be able to survive without that," said Laurie Thomas, the Executive Director of the Golden Gate Restaurant Association.

Thomas says there won't be an accurate estimate on how many San Francisco restaurants permanently closed until the city completes the permit renewal process in July.

In the last month, at least 20 San Francisco area restaurants and bars have permanently shut their doors, according to Eater SF.

"We are still in a bit of a period of wait and see," said Thomas. "Wait and see what's going to happen this summer. Will we have that offsetting tourism coming in? Or a slow summer?"

Only time will tell. Some may bounce back like O'Leary. While others like Davis Cleaners off the Embarcadero will be shutting down for good at the end of the month.

"A lesson to learn from COVID is just how fragile our small businesses are," said Fong.