"After May 7, if someone cannot prove where their items come from, they are going to be confiscated and asked to move."
KGO
By Luz Pena 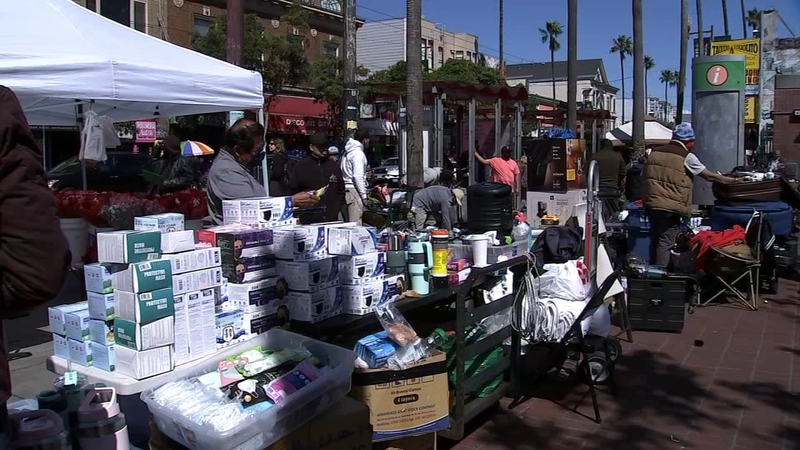 SAN FRANCISCO (KGO) -- Before the pandemic, Angel Sanchez was a construction worker. Now, he is one of dozens of vendors who has set-up shop on 24th street in San Francisco's Mission District where he sales shampoo bottles, detergent and toys among other miscellaneous items.

Angel buys his merchandise at the flea market and slightly marks up the price. He's making between .50 cents to $2 per item.

Angel says he would never steal. He buys everything he sales, though he doesn't ask where the items come from. With his profits he pays the bills, and the rest he sends to his kids in Mexico. One is going to college and the other one is in high school. Lately he says business has been difficult.

Susana Rojas Executive Director of Calle 24's Cultural District says many of the new vendors are coming from the Tenderloin following the state of emergency declaration in that neighborhood.

"I think they are coming from the United Plaza in the Tenderloin because they are being very strict," said Rojas and added, "It is getting worse. Unfortunately, as things have been happening in other parts of the city, then people get desperate and they start moving around trying to find a place to be able to either set-up a tent to sleep or a tent to sale some supplies."

Watching everything from afar is Diana Medina. She's opened Diju Jewelry 14 years ago. She used to be a street vendor and understands the struggle. Medina wants street vendors to have a permit.

A day after our I-Team story aired, a spokesperson for Chesa Boudin fired back late Friday, saying the SFPD made arrests in less than one percent of car break-ins last year.

Many street vendors we spoke to say they want a permit.

Rojas and her team are signing up vendors like Angel to a program introduced by Supervisor Hillary Ronen that will require street vendors to have permits starting next month.

"After May 7, if someone cannot prove where their items come from, they are going to be confiscated and asked to move," said Rojas.

Rojas says it will be complicated for many vendors to reproduce proof of purchase even though they are paying for items.

"The problem is that they do go to the flea market. They get them legally, but they don't give them any receipts. When they come over here, they won't be able to prove where they get their items from," said Rojas.

RELATED: 'I covered their eyes and we ran away': Family recounts what it's like living in SF's Tenderloin

More than 20 vendors have signed up for the program so far.

Rojas says the plan is to continue registering vendors to the program and assign them specific areas from Cesar Chavez to 24th street. Rojas says the city still doesn't know how much, if anything, they will charge these vendors to set-up shop.