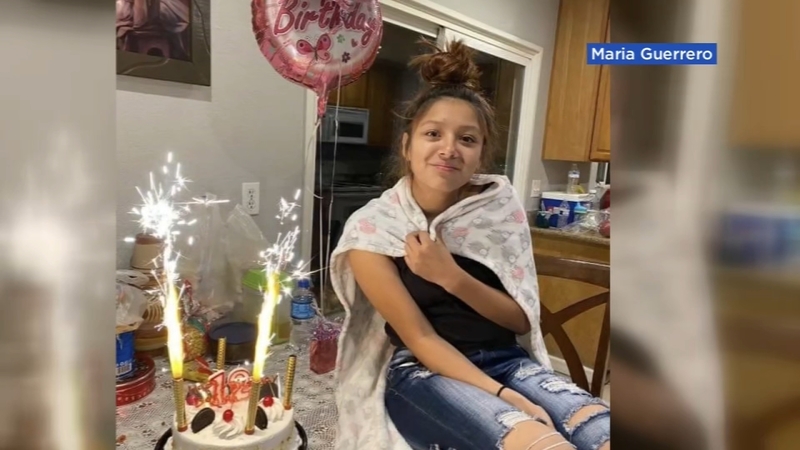 SAN JOSE, Calif. (KGO) -- The Santa Clara County District Attorney's office said Tuesday a 16-year-old drug dealer was arrested and charged with murder in the case of a 12-year-old San Jose girl who died of a fentanyl overdose.

Officials said the 16-year-old San Jose resident, who was charged as a minor, sold the drug to the girl in 2020. She died shortly after consuming three-quarters of a single pill.

The girl, named Dalilah, became the youngest person to fatally overdose in the county in 2020.

In video and pictures given to ABC7 News you can see she loved dancing and playing with friends. Tragically that all came to an end after ingesting an M-30 pill laced with Fentanyl while out with friends.

Her family says, "She was loved by many people."

In a Zoom interview translated by ABC7 News reporter Luz Pena, Dalilah's mom Maria Guerrero described the emotions after learning what happened to her daughter, someone who she says had good grades and was well-liked by teachers, friends, and siblings.

"The day her daughter passed away someone took a photo when she was laying in the car. Someone even sent her a message saying that they were considering dropping her off or even tossing her to a river," said Pena as she translated what Guerrero had to say.

On that day, Nov. 14, 2020, Dalilah was with two other teens when she contacted the suspect and bought the M-30 pill. The group took a video of her lining up the crushed pill for ingestion. After snorting the fentanyl, she passed out and began snoring, a telltale sign of a fentanyl overdose. She was brought to the Regional Medical Center in San Jose where she was declared dead.

Now more than a year later, comes a break in the case. The then 16-year-old suspected of selling Dalilah the M-30 drug that looks like a Percocet pill, was charged.

"Right now the 16-year-old is being held on 187 charges, which is murder. The minor had advertised sales before this time," says Santa Clara County Deputy District Attorney Don Shearer.

The D.A.'s office says that Fentanyl, and specifically M-30 drugs, have become a major problem among teens and young adults. The D.A.'s office is now creating a major crime and drug trafficking unit to investigate and prosecute drug cartels.

RELATED: Mom's billboard warns others after daughter dies due to fentanyl-laced pill

As for Guerrero's reaction to the murder charge, "She was counting down the days and didn't know that there was going to be justice and today there is justice," said Pena after the translation.

Santa Clara County officials will speak Wednesday at 2 p.m. outside San Jose City Hall to address both Fentanyl and M-30 pills in the South Bay community.

"After thousands of deaths, everyone should know that fentanyl is a deadly poison," District Attorney Jeff Rosen said in a statement. "Thanks to the San Jose Police Department, the Santa Clara County Specialized Enforcement Team, and our investigators, this child's tragically short life may help save others."

This is the second time the Santa Clara County district attorney has charged a drug dealer with murder after a fatal overdose. A San Jose man is facing a murder charge after using the social media Snapchat app to sell a fatal opioid to a Santa Clara 18-year-old in 2020.
Fentanyl is approximately 50 to 100 times more toxic than morphine. Just a few grains can cause a fatal overdose. Illicit fentanyl is sometimes pressed into pills made to look like other prescription drugs (such as oxycodone, hydrocodone, Xanax, and others).