The report doesn't reveal why the county failed to bring the PPE back inside, even though Fiesta Hall was vacant.
KGO
By Dan Noyes 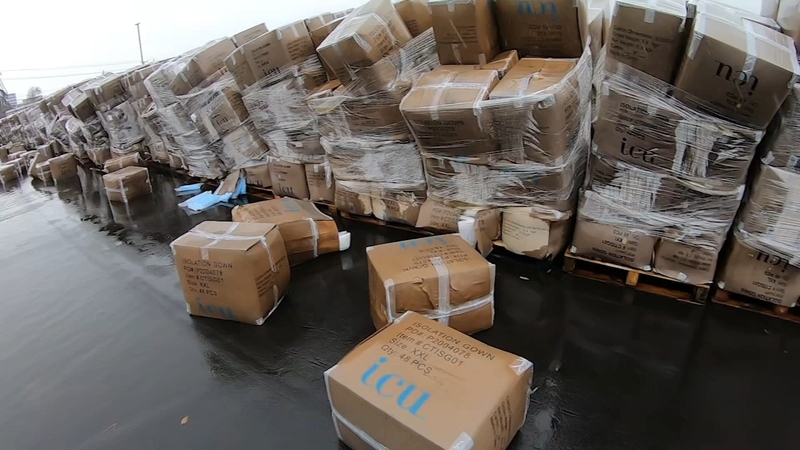 SAN MATEO, Calif. (KGO) -- The official report is out on how millions of dollars of personal protective equipment bought with your tax dollars for the pandemic was left out in the rain in San Mateo County. But the report is raising more questions than it answers.

The I-Team's Dan Noyes has read a lot of investigative reports and has never seen anything like this - just twelve pages, short on detail, no appendix, no invoices, no emails that trace how this happened.

One qualified expert with years in the field tells us, "it's a terrible report."

To investigate this mess, millions of dollars worth of PPE left out in the rain, San Mateo County didn't look to an expert in the emergency medical services field. They hired Jim Lianides, a recently retired school superintendent from the area.

RELATED: Remember all that PPE left in the rain in San Mateo Co.? Here's how much its costing to clean it up

Several experts with whom we spoke say, that was a mistake.

The 12-page report echoes much of the county's narrative and gets several facts wrong. Page one says ABC7 reported in January that $7 million dollars worth of PPE had been left outside. Actually, this is what we reported that day: "In just the past few minutes, a source confirmed to me the cost of all that PPE is more than $10 million."

VIDEO: Here's how much its costing to clean up PPE left in the rain in San Mateo Co.
EMBED More News Videos

San Mateo County reveals how much its costing to clean up the millions of dollars worth of COVID protective gear that got left in the rain.

The report also says most of the PPE was not suitable for hospital use even before it got left out in the rain. But, we found face shields used in the medical field, surgical gowns, and the largest number of boxes were isolation gowns.

The CDC says, in fact, "Nonsterile, disposable patient isolation gowns, which are used for routine patient care in healthcare settings, are appropriate for use by HCP when caring for patients with suspected or confirmed COVID-19."

Lynch headed emergency medical services for Monterey, Santa Clara and Alameda counties before running the inland counties for ten years, and told the I-Team, "My agency that I recently retired from managed millions of dollars in inventory of PPEs. We track them, stored them, distributed them, and we're able to account for everything down to a single box of gloves."

In the early days of the pandemic, when PPE supplies were short, the report says San Mateo county staff believed "it would be preferable to have too much, rather than too little, equipment." But they ordered so much, it "led to a concern expressed by FEMA in May 2020 that the county had submitted far more claims (inclusive of PPE, medical staff, hospitals, hotels, and shelters) than Los Angeles County."

"We were nowhere near the volume of supplies that they ordered for a much smaller county. And it makes no sense to me why that level of ordering was done," said Lynch.

Where to store all that excess? The county paid $1.2 million to rent the Event Center's Fiesta Hall for a year. Even though they still had a lease, the county agreed to move all that stuff outside to help the Event Center host SaasTR; the "software as a service" group has posted highlights from San Mateo.

The report does not reveal why the county failed to bring the PPE back inside, even though Fiesta Hall was vacant the rest of the year. But, Lianides writes the rain didn't cause much damage: "Since most items of equipment were individually sealed in plastic, virtually all of it is salvageable and reusable."

"It's certainly been my understanding that medical supplies, when exposed to the elements are no longer useful. So I think that one of the challenges there is they may be distributing supplies that could have potential negative outcomes for the users."

Even though internal emails back up the $10 million figure for the cost of the PPE, the county insists it's just $7 million, but they have not responded to ABC7's request for invoices to prove it. And, don't forget the million they paid in rent and another half a million spent on the cleanup efforts.