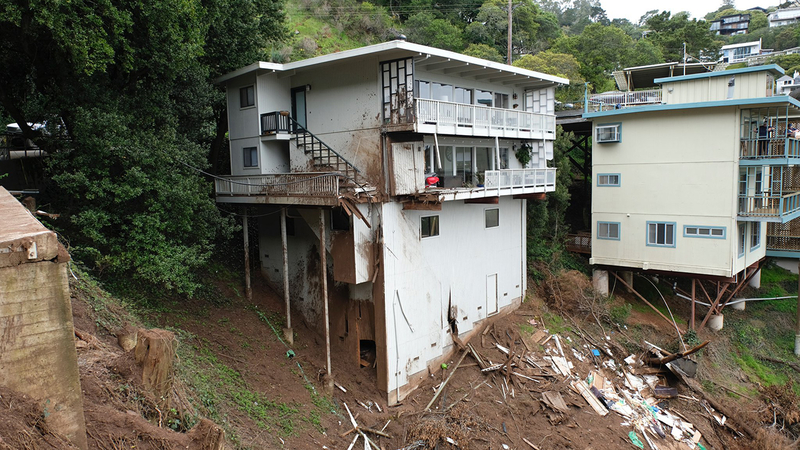 Still locked out 6 weeks after the Sausalito mudslide

SAUSALITO, Calif. (KGO) -- In mid-February, a mudslide moved houses and buried cars in Sausalito. A woman was inside one house that slid down a hill into another house.

She survived with minor injuries, but there are other victims, as well.

Monday, the street reopened but that has been little help to some former residents.

It's a nice view from his apartment deck in Tiburon, and he's not exactly a hardship case, but Bryan Wilson, formerly of Sausalito, still misses his old home.

"Do you think about it, much?" we asked.

Bryan used to live in the last red-tagged home following Sausalito's Valentines Day mudslide. It took out the house next door and pulled away his carport, essentially cut the family off from most of their belongings.

412 and 414 Sausalito Blvd might as well be an island surrounded by air now.

"All my belongings and furniture are in there." Now, she's renting a houseboat. "I like the boat, and would like it better with my stuff."

Five days after the slide, Caryn, Bryan, and his wife did gain brief entry to the house. They pulled out whatever they could fit through a window and carry up a gangplank. The rest remains inside. They're waiting for guidance from the city.

"We are being as deliberate as we need to be to get as much reimbursement from the state and feds as possible," said Andrew Davidson, the senior engineer for Sausalito Public Works.

"There has been a lack of coordinated communication," said Caryn.

Sausalito estimates the debris field will remain until late summer, at least. It includes eight cars.

One of them belongs to Bryan Williams, who at least managed to get his personalized plates back. It's a small victory. The plate reads, 'Wilsn22.'

As to how Bryan recovered the plate, he is not saying. Nor is the National Park Service talking. It owns the land that slid.

ABC7 News reached out again on Monday, but received no response.