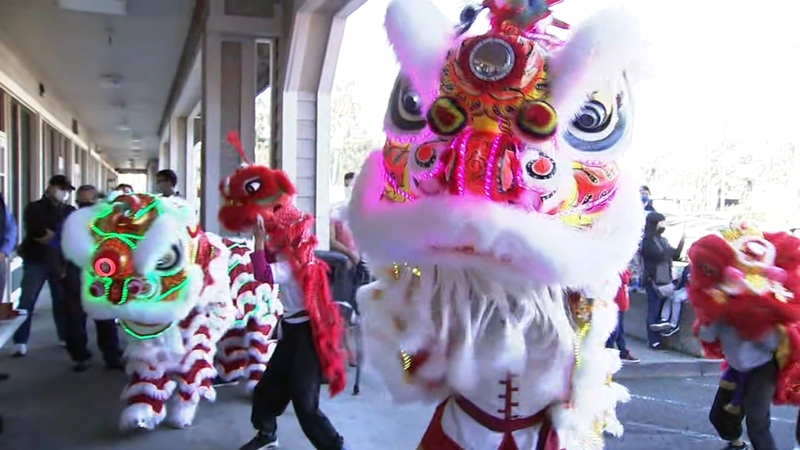 HERCULES, Calif. (KGO) -- Preparations for the Lunar New Year of the Tiger on February 1 were in full swing in Hercules outside of Yee's Martial Arts Academy. There, the West Coast Lion Dance Troupe performed a ceremony they haven't been able to do, for awhile.

"This is a traditional eye-dotting ceremony where we bring the lion and this year we have a dragon which we're bringing to life." Says Anthony Shiu, the founder of the troupe said.

The troupe has been performing in San Francisco's Chinese New Year Parade every year since 1988. After COVID canceled last year's parade they're now roaring back to life with the parade, set to be held on February 19.

ABC7 News anchor Dion Lim had the honor of "waking up" one out of the two lions there Saturday.

At the event, there was also a dragon which holds special significance. Shiu named it after Jasper Wu, the little boy killed by gunfire on I-880 in Oakland this past November. With his grandmother and grandfather looking on, Jasper's dotted the eyes of the Jasper dragon. Community members also burned incense and paid their respects.
RELATED: Family holds funeral for Jasper Wu, toddler killed during I-880 shooting in Oakland
EMBED More News Videos

Nearly two weeks after 23-month-old Jasper Wu was killed by gunfire on an Oakland freeway, he was laid to rest.

Anthony Shiu says lion dancing and these traditions run in his blood.

"I always wanted to do it since I was a little kid...didn't start doing it until high school. Even though I'm 60 I still perform and today will perform a little."