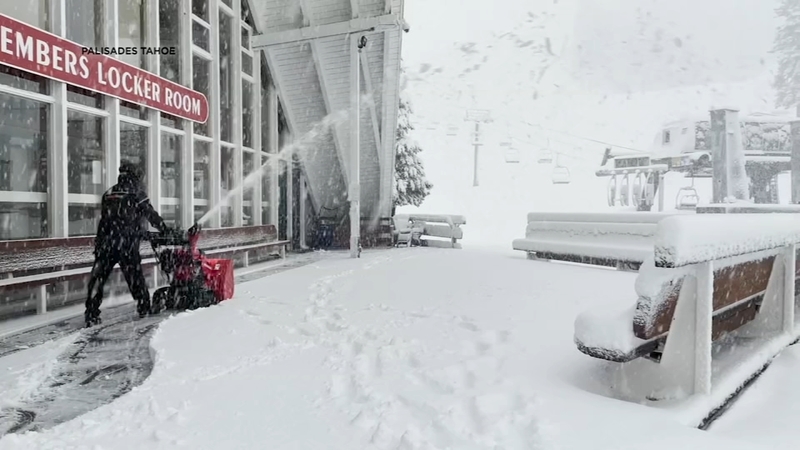 SAN FRANCISCO (KGO) -- A surprise from the skies as the Sierras were slammed with a massive April snowstorm, one more for the ski season.

Social media blew up with beautiful scenes of white from pictures and videos shared by the lucky few right in the middle of the action.

"I'm at lake level at 6,257 and there's about 4-6 inches on the deck here," Sierra snow expert Kevin "Coop" Cooper said. "It's heavy, but at upper elevations it's much lighter and they've seen anywhere between 6-14 inches around the region."

A welcomed sight from just 20 days ago when the Sierra snowpack showed only 38% of average.

While getting pelted with snow, Cooper told us how great this is for the area and the water tables and he says more is on the way.

Video from the UC Berkeley Central Sierra Snow lab shows where they got nearly 4 inches of fresh snow Monday morning.

"We're supposed to see another cold front pass here in the next several hours which is really going to bring on another significant amount of snow," Cooper said. "Forecast models have us looking at anywhere between 8-12 inches on the crest at the low, upwards of 24 inches on the high side of it."

April showers normally bring May flowers, but this snow shower is actually going to bring business to the ski resorts.

While many resorts are winding down for the season, Palisades Tahoe says the 58 inches of snow they got this month is more than the first three months of the year.

They feared they wouldn't remain open into May, but this storm changed things.

While snowpack measurements are sending a sobering message to California, a new study is painting a broader and perhaps even more urgent picture.

Locally, that means a surprise of more business for sports stores.

Even though the signs are up for the end of winter sale, Sports Basement in Campbell says they have seen a resurgence of sales due to the storms.

"I think Bay Area residents are like fair weather fans, when it snows, they're going up to the mountain," Bridges-Oliva said. "We've seen a lot of people come in, grab last minute rentals, grab jackets and things like that."

So if you've got your gear and are going up to the sierras to enjoy the snow this weekend: be safe and have fun.