Police couldn't answer how much jewelry they recovered but say the suspects were selling it as fast as they were stealing it.
KGO
By Zach Fuentes 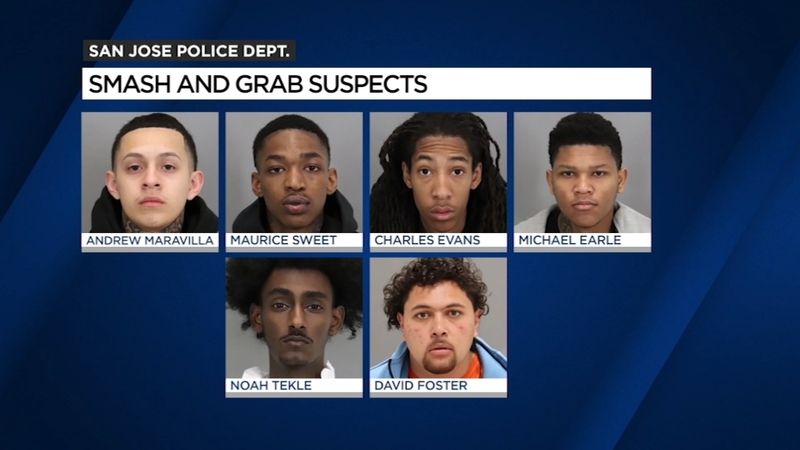 SAN JOSE, Calif. (KGO) -- Six people suspected of being connected to several smash-and-grab robberies around the Bay Area have been arrested, according to officials at the San Jose Police Department.

The six arrests have been a huge relief to businesses that police believe the suspects targeted.

Its owner did not want to speak on camera but tells us he is glad police now have suspects.

Just steps from that store is the Quick Service Jewelry Repair store, another that was hit by smash-and-grab robbers.

Though the six suspects arrested are not charged in connection with the robbery at the store owned by Ryan Nguyen, he says the arrests are still welcome news.

San Jose police say the six suspects arrested are believed to have worked together between October 2021 to January of this year.

A smash-and-grab robbery was caught on video at Sam's Jewelry at Southland Mall in Hayward on Sunday night.

They're accused of targeting jewelry stores throughout the Bay Area.

"Most of these incidents happened last year," said Sgt. Christian Camarillo with the San Jose Police Department. "These are long, very complicated investigations"

San Jose Police wouldn't go into details as to how their investigation linked the six to the crimes but say they had help from several other Bay Area police departments and departments in Roseville and Merced along with United States Marshal Services.

Police couldn't answer how much jewelry they were able to recover but say the group was selling it as fast as they were stealing it.

"Some of the people we want to target is who's buying this stuff after these guys steal it," Camarillo said. "That investigation is ongoing."

Police in Concord are searching for suspects who broke into a jewelry store Monday evening, stealing nearly everything.

On top of the charges, the six are facing in connection with the smash-and-grab robberies, detectives also seized several guns including assault weapons and self-made firearms without serial numbers that were converted to fully automatic weapons.

The six suspects are all between 18 and 20 years old and now face huge consequences.

"These suspects involved in these robberies," Camarillo said. "They're looking at significant prison time."