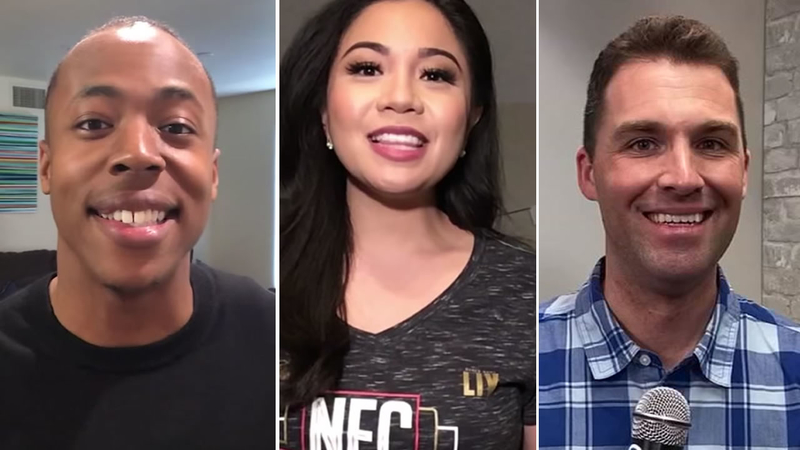 SAN FRANCISCO (KGO) -- The San Francisco 49ers are facing off against the Kansas City Chiefs in Super Bowl LIV and these ABC7 News staff members are the luckiest in the newsroom -- they were sent to Miami!

Our team of reporters are bringing you all the sights, sounds and hype now through Super Bowl Sunday.

Watch the videos below as they share their excitement and what it means for them to cover one of the most exciting sporting events of the year.

Amanda del Castillo is thrilled to be covering the hype in Miami!

Amanda del Castillo here! I am thrilled to be part of the ABC7 49ers Super Bowl LIV team.

I cannot believe I've been given the opportunity to cover my home team in a place I call my "second home."

He and I try to make the trip to Florida as often as possible. In fact, we flew back for Thanksgiving last year. During that trip, he and my in-laws managed to get a Miami Dolphins hat on my head for the team's game against the Philadelphia Eagles. But I like to think red is more my color.

Back in the Bay Area, I am convinced my dad is the team's #1 fan. Since my brothers and I were young, he's shared stories about the 49ers moving from Kezar to Candlestick Park. He was a season ticket holder early on, and would take my brothers and I to games. He'll tell you that back then, I was more interested in the stadium's lighting than the team. I can assure you, that's changed.

I've shared a few pictures of my family visiting Candlestick for fan events. I grew up in San Francisco's Excelsior District, so my family was never too far away.

I was born the same year the Niners defeated the Denver Broncos in Super Bowl XXIV. For Super Bowl XXIX against the San Diego Chargers, I was too young to fully appreciate what was happening. I try to forget Super Bowl XLVII.

This season has been unbelievably memorable. From the actions of the 49ers on and off the field. I've followed a number of stories proving the 49ers are working hard to build a better Bay Area, and also working hard to bring a sixth Super Bowl win to the Bay Area.

ABC7 Community Journalist Dustin Dorsey shares his excitement about Super Bowl LIV ahead of his trip to Miami to cover the game.

Hey 49ers Faithful! I can't wait to head down to Miami to cover my very first Super Bowl. As the South Bay Community Journalist, I have been following along with the team all season long with a lot of their off the field work that they have done to build a better Bay Area, but now I get to be part of the fun live from the big game itself!

Four years ago, the Super Bowl came through Santa Clara. I watched as a newly graduated journalism student wishing I could be part of the coverage. That day has now come!

I hope to allow those fans who can't make the trip to Florida to live vicariously through me and let you see what it's like to experience Super Bowl week. I can't wait to bring you all the fun, see you in Miami!

The last time the 49ers won the Super Bowl was in Miami in 1995. I was there covering the game and brought my wife and baby daughter Kiana, who was only 8 months old at the time.

The last time the 49ers won the Super Bowl was in Miami in 1995. I was there covering the game and brought my wife and baby daughter Kiana, who was only 8 months old at the time.

We were in a restaurant eating dinner and noticed that 49ers quarterback Steve Young was there with his family.

As Steve was leaving, it seemed like everybody wanted to take a picture with him.

Young graciously stopped for every photo so it was taking forever for him to leave.

Steve saw me and stopped at our table for a moment to chat. I didn't want to bother him with another photo request, but my wife was hoping to get a picture of Steve with our baby. He said goodbye and days later, led the 49ers to victory.

Fast forward to 2020, my daughter is now 25 years old and literally EVERY TIME Steve appears on ESPN, my wife says, "I can't believe you never got that photo of Steve with Kiana!"

I really wish I had a time machine to fix this.

The Super Bowl is in Miami this year and Julian Glover absolutely loves the city. That's why he's so excited to cover all of the hype around the game.

It was the first place I called home after leaving my hometown of D.C. for undergrad. I still remember the moment I first saw the palm trees dancing in the sun, had my first shot of Cuban coffee (yes, shot - not cup), and took in Key Biscayne. I was in love with Miami. And I still am today.

I am so incredibly excited to be a part of the talented team of journalists (photographers, reporters, and digital content producers) headed to beautiful Miami for ABC7 News to cover Super Bowl LIV and the 49ers' historic run for a record sixth Lombardi trophy. What a team. What a season. What a game it's going to be.

When I think of Miami, I think of so many of the things that make living - even visiting - there so special. The culture: Calle Ocho, Wynwood & Miracle Mile. The food: Cuban coffee, fried plantains, rope vieja, Cuban sandwiches and so many other delicious dishes (I could keep going). The places: Key Biscayne, South Beach, the Biltmore, the Versace Mansion, Vizcaya, and the University of Miami (shameless plug), where the 49ers will be practicing.

Miami is a place that is so near and dear to my heart and I can't wait to share the flavor, sights, and sounds with all of you here in the Bay Area. Hopefully the Magic City has a little extra magic in store for the 49ers and they'll bring home the "W" come Super Bowl Sunday.

Covering football is Julianne Herrera's answer to "what do you want to do when you grow up?"

Hello friends! My name is Julianne Herrera. I'm a digital producer here at ABC7 News and so blessed to be part of the team covering Super Bowl LIV in Miami!

Ironically, I grew up in a Raider fanatic household. My family bleeds silver and black, but I don't just love the Raiders - I love football! I love the NFL. I love tailgates. I love Buffalo Wild Wings on Sundays with all the games on and refreshing that fantasy score every thirty seconds. I love the camaraderie, and live for the competitiveness. It brings people together, and no event does that better than the Super Bowl.

I love football so much (partly thanks to my five older brothers and former Raiderette sister), that when I was 5 years old, I told my parents I wanted to be an NFL quarterback when I grew up. Turns out I wasn't allowed to play football (shocker), so I settled for fútbol instead and covering the NFL became my new answer to "what do you want to be when you grow up?"

There's going to be so much to see in the Super Bowl city and we don't want you to miss any of it! Since we can't take you all with us (crying emoji), I'll be posting pretty much all day every day and do my best to make you feel like you're right there, too.

Because let's be real, Bay Area. You're part of this team and the 49ers wouldn't be here without you! See you in Miami, it's gonna be LIV.

For as long as he can remember, the Super Bowl has been Chris Alvarez' favorite sporting event.

Hi everybody, I'm Chris Alvarez, sports anchor here at ABC7. I'm thrilled to be covering the Super Bowl this week and can't wait to arrive in Miami to bring you all the sights and sounds leading to Super Bowl LIV.

Faithful then, Faithful now. @49ers fan share pictures of you either then or now in your #49ers gear. #ABC7Now #GoNiners ➡️ https://t.co/xjReR0D3bz pic.twitter.com/iJxyWnWm9a

For as long as I can remember, the Super Bowl has been my favorite sporting event. There's nothing like it in the world! It's the greatest one-day sports event with what seems like the entire world watching.

Growing up in Fresno, I was a 49ers fan and one of my favorite childhood memories was getting a Joe Montana helmet/jersey set as a youngster. All these years later, I now have the privilege and honor to cover the 49ers in the Super Bowl for ABC7. It's a dream come true and I can't wait to get the week started.

ABC7 Senior Sports Producer Casey Pratt has covered many sports games. He takes a look back before heading to Miami!

I have covered the World Series, NBA Finals, and the College Football National Championship, but this will be my first Super Bowl and first time in Miami.

I grew up in the Bay Area as a 49ers fan - despite my mom rooting for the Raiders. As a journalist, though, you set fandom aside and never break rule number 1: No cheering in the Press Box.

I have been credentialed to cover the 49ers for 13 years and the success of this 2019 season has been a pleasant surprise.