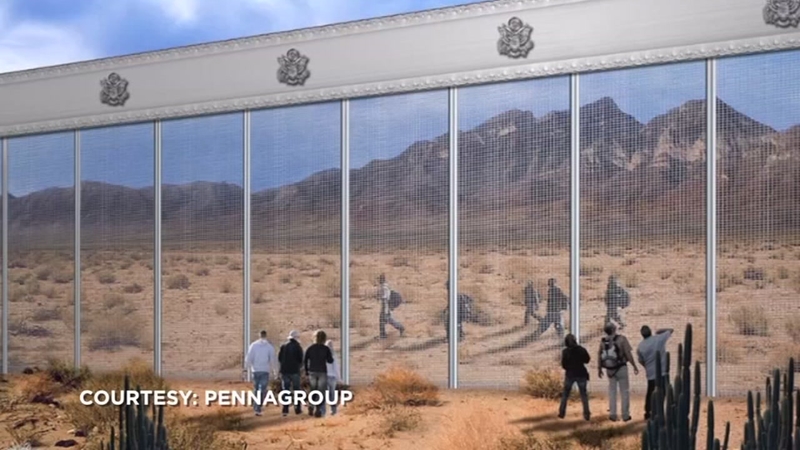 HOUSTON, Texas -- Plans to build Trump's wall are already underway. Some of the ideas are coming from right here in Houston.

The feds asked companies to submit proposals for prototypes and got a big response. ABC13 Eyewitness News dug through all the proposals to build the wall. More than 700 companies have submitted bids, including the PennaGroup.

"We've been getting a lot of death threats," said Evangelista-Ysasaga. "I'm Latino and this is a Latino-owned company and we weren't sure whether or not we wanted to enter into this project because there was a lot of political controversy around it."

Controversial or not, minorities, women, veterans and small businesses are encouraged to submit bids.

As a minority and a small company, Evangelista-Ysasaga wants his company to build the wall because he knows they will do it with integrity. His proposal does not include razor wire or electric fencing.

"We just didn't want to wake up on a Sunday morning and have to read about a family of Hondurans coming across in the middle of the night. They get caught up in this stuff, or you know, just seriously hurt, or die," he said.

Another bid coming out of Houston is from a Rice professor. Some might call it a mockery.

"His will to build the wall is not necessary to the solution to the problem," said Rice Professor Urtzi Grau.

Instead of building a wall, Professor Grau wants to start a conversation. Still, he submitted a bid. His wall would be made of spacecraft material that's completely see-through.

"It also operates, this proposal, as a way to set up a forum or a series of questions that could get responses," said Grau.

Then for the next proposal, we packed up and headed to the border and talked to the owners of a company who live in the Valley.

James Carpenter is the CEO of Quantum Logistics, LLC. He and his wife, Michelle Carpenter, submitted a bid for the project.

"That is our backyard," said Michelle Carpenter of Quantum Logistics.

Their construction site is just miles from the border. Carpenter builds walls for combat. Now, he's applying that same type of technology and skill to their border wall concept.

"We are in this for the community. We care about our people," said Carpenter.

She said if they won the bid, they would work to keep jobs local.

"We want to be able to provide a positive economic infrastructure and provide jobs for locals in the area," said Carpenter.

As for what the wall looks like now in the Valley, the border is separated by the Rio Grande. Some areas having high fencing and others don't. All over the area border patrol is very present, from the sky and the ground. The area is highly-monitored.

Congress approved DHS and CBP to re-program $20 million to construct four to eight prototypes. The prototypes will be built in the San Diego area. The prototypes must meet minimum specifications for border security.

The wall is expected to cost tens of billions of dollars.