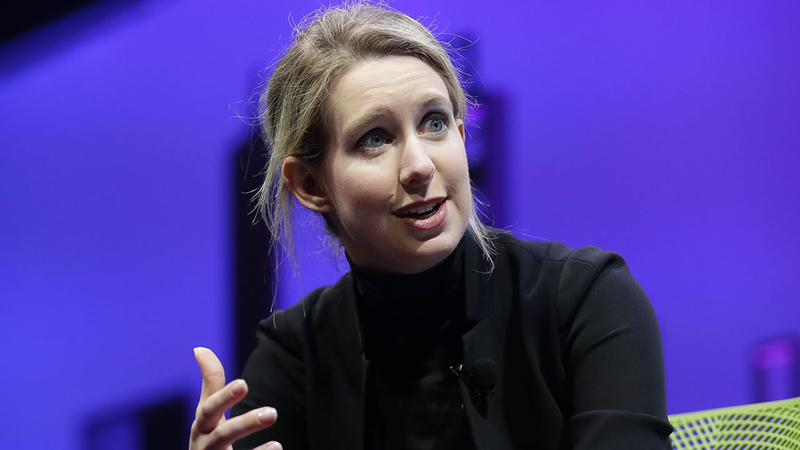 ABC '20/20': 'The Dropout' covers rise and fall of Elizabeth Holmes

Elizabeth Holmes, the entrepreneur who built a multi-billion dollar company that failed due to fraud, is the subject of a new series called "The Dropout" on Hulu -- where you will also find an episode of "20/20" devoted to her case after it airs Friday on ABC.

The title refers to the fact Holmes left Stanford University to start Theranos when she was just 19 years old.

"The Dropout" is also the title of an ABC News podcast hosted by Rebecca Jarvis.

For millions of viewers, the Hulu show is what my very British father used to call, "a corking good tale," and it's a show I heartily recommend. But for ABC's Chief Business, Technology and Economics Correspondent, the series was a full circle moment.

The sentencing of Elizabeth Holmes on four counts of criminal wire fraud will be delayed until Sept. 26.

It comes 8 years after she first began covering Holmes, so a trip to the Los Angeles set of the movie last fall was, to use her word, "surreal."

"There are so many details here," she said.

"They did such a good job" recreating the sets," she said.

The two got together where fiction meets fact, at the intersection where art imitates life -- so closely here the lines truly do get blurry.

Sandy Kenyon has more on the new Hulu series "The Dropout" about the rise and fall of Theranos and Elizabeth Holmes.

"It was incredibly powerful to walk in and see this story, that I've spent so much time researching and engaging with, come to life," Jarvis said.
The origins of all this lie in her podcast, the now familiar music and her familiar intro: "I'm Rebecca Jarvis, and this is 'The Dropout.'"

Among the tens of millions of listeners was Seyfried, who earned her first Oscar nomination last year and became a fan of the podcast long before she was cast in the adaptation.

The Hulu show is created by one of TV's most successful young producers, Liz Meriwether, who is known for sitcoms like "New Girl."

"Her process, in many respects, was similar to a journalist in that she asked more questions," Jarvis said. "She had more conversations. She dug deeper."

That proved timely when the script had to be changed during filming to reflect the new developments in the case.

The "20/20" episode makes for a nice companion piece, because it takes viewers behind the scenes of the show while bringing them up to date on the aftermath of Holmes' conviction for fraud.

Former Theranos CEO Elizabeth Holmes was convicted on 4 of 8 counts in her criminal fraud trial.

For Jarvis, the experience of seeing her podcast transformed into a TV show has ultimately been reward.

"Elizabeth Holmes is an enigma to so many people," she said. "And, the voice, the body movement, all of the elements of who she is are perfectly displayed by Amanda Seyfried."

Naveen Andrews is a perfect match for her, playing Holmes' former lover and advisor Sunny Balwani.

"The Dropout" streams on Hulu, owned by Disney, the same parent company as this ABC station.