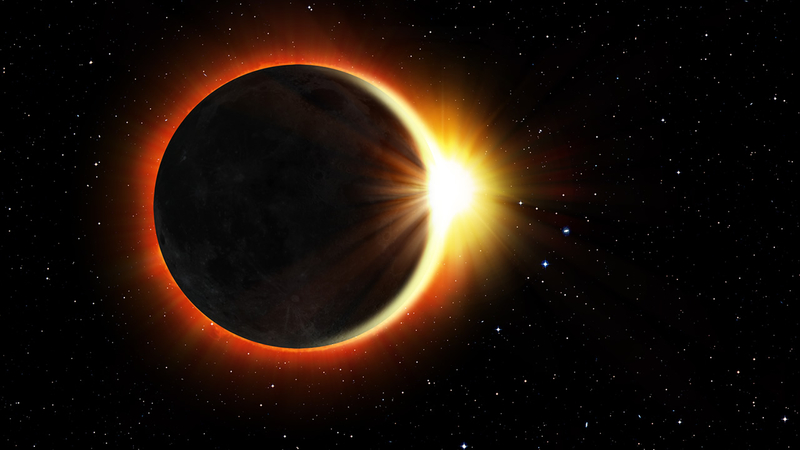 SAN FRANCISCO (KGO) -- It'd be hard to find anyone more excited about this month's upcoming solar eclipse than Andrew Fraknoi.

The astronomy teacher at Foothill College even insisted on taking a break from summer classes to tour libraries and community centers across the Bay Area, educating people about the eclipse and the safest way to view it.

A total solar eclipse hasn't been visible from the United States since Feb. 26, 1979.

But the upcoming Aug. 21 eclipse will be even more unique: It will cross the entire continental U.S., entering in Oregon and exiting in South Carolina. You have to go as far back as June 8, 1918 for the last time that happened.

Fraknoi wrote a children's book, "When the Sun Goes Dark," to help explain how eclipses happen, using a tennis ball and hula hoops to illustrate the celestial dance between the sun, moon and earth.

The eclipse will pass quickly with the peak lasting about two minutes and 40 seconds. For that reason, Fraknoi suggests adults explain the science behind the event beforehand.

"What happens during a total solar eclipse is that the day turns into night. The stars actually come out," he explained. "It's an eerie unearthly feeling, and it is something you need to enjoy with all your senses."

The Bay Area isn't on the total eclipse path and will only experience seeing about 75 percent of the sun covered. (The nearest place to get the full effect is central Oregon.)

But, there are some wonderful ways to see the partial eclipse here - and keep an eye on the total solar eclipse as it crosses the United States.


Here's how to experience it all, right here in the Bay Area:

1. Get Away from the Coast
The eclipse begins at 9:01 a.m., and if you know anything about San Francisco in the summer, there is a good chance the city could be covered in fog. Head inland, but arrive early: The eclipse will reach its maximum stage around 10:15 a.m.

2. Solar Glasses
The best way to view the eclipse is with a pair of solar glasses, which have filters similar to welder's glass. Before you stare at the sun, make sure your glasses are ISO 12312-2 compliant. (They should have a logo printed on them.)

But beware, counterfeit glasses have flooded the market. An easy way to check is by putting them on. They should block out all light in a room, even if you stare at a light bulb. The only thing strong enough to be seen with these glasses is the sun. Never look at the sun wearing regular sunglasses. They do not provide enough protection, and you could damage your eyes or go blind.

3. Make a Pinhole Projector
Grab a piece of cardboard or a postcard and punch a hole in it with either a pushpin or a pencil. It does not have to be perfectly circular.
With the sun behind you, hold the pinhole cardboard over a white sheet of paper to project an image of the sun. You can use a pegboard, a colander or even a cheese grater to get multiple images of the sun. In a pinch, use your hands to create a checkerboard pattern to create a similar effect. Look at the shadow of the sun. Never stare at the sun directly.

4. Viewing Events
Several museums will hold special eclipse viewing events on Aug. 21. The Exploratorium will open early at 9 a.m., and visitors will be able to see the partial eclipse through telescopes and live video streams of the total eclipse from Oregon and Wyoming.

The California Academy of Sciences will provide assisted viewing on the roof and East Garden. A live stream of the total solar eclipse will be broadcast in the Naturalist Center. A second viewing site will be available in Candlestick Point Recreation Area.
Chabot Space & Science Center will open from 8 a.m. to 1 p.m. for telescope viewings and will feature a live feed of the total eclipse in the museum's theater.

The San Jose Astronomical Association will have a viewing event at Houge Park in San Jose.


5. Exploratorium App
Download the center's Total Solar Eclipse free app, which features live video streams from Oregon and Wyoming as well as educational videos on the sun and how eclipses happen. The app will also have live coverage and videos in Spanish.

7. Live Web Stream
Check back here on the day of the solar eclipse to watch live video in the Bay Area and other parts of the country.