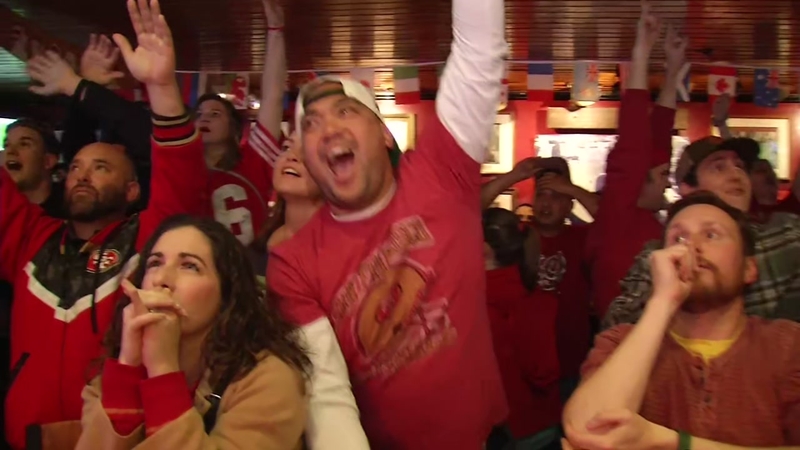 SAN FRANCISCO (KGO) -- Sunday night's 49ers - Seahawks game may have been in Seattle, but a good portion of the Niners' fans showed up to Kezar Pub in San Francisco to watch the big game.

From the first quarter, 49ers fans let their red and gold gear fly... at least as far as they could, in the packed Haight-Ashbury bar.

"It's a special night, number one seed, we're getting to the Super Bowl this year," exclaimed J.V. Castro, who grew up in the Bay Area and says his loyalty to the team goes back to the greats. "Joe Montana, Steve Young, Jerry Rice, Ronnie Lott - the whole crew. This is it! It's been a while, since '94, we're ready."

Pub owner and rally instigator, Cyril Hackett, bought the bar 25 years ago, and there's been a drought of championships ever since. But Hackett points out that before Levi's Stadium, and before Candlestick, the 49ers had several bad seasons playing across the street from the bar at Kezar Stadium.

"People think this was the clubhouse for the players, but their wives came in here. The 49ers were so bad back then, the players didn't come in themselves."

A few Seattle fans braved the San Francisco crowd, including one woman from Seattle. "Someone has to show support from afar. Pacific Northwest Proud!"

And it wasn't just Niners fans who were rooting for the home team at the bar.

"I'm an Eagles fan, but I live in San Francisco, so I have to be a 49ers fan. What I really like - Jimmy G. There's no cuter quarterback," said Iryna Kwasny, a San Francisco resident, who celebrated the 49ers win while wearing her Eagles jersey.

Most of the game looked good for the 49ers, until the end of the fourth quarter when it got a little hairy.

Sending out some serious prayers to the football Gods here at Kezar Pub 🙏 pic.twitter.com/vGihhSTobE

"My anxiety is through the roof. I care about this game! I've never wanted the 49ers to win so badly," said San Francisco fan, Cory Roa.

And with a touch and go finish, the 49ers secured the home-field advantage through the NFC playoffs and a possible ticket to the Super Bowl.

"I was freaking out. We win," exclaimed Castro, who's confident the 49ers winning streak will continue. "We'll see you in Miami!"

And the crowd goes wild!!
49ers fans at Kezar Pub are pretty pumped about the new number on the score board!
9-0 ❤️🏈❤️ pic.twitter.com/ITVL9GuXTi

Q4 and the beer and smiles are still flowing at San Francisco’s Kezar Pub. I’m from San Francisco, so I feel like it’s okay for me to say... GO NINERS!! 19-7 ❤️🏈❤️ pic.twitter.com/POvY4tKwTS

So much easier to cover this type of story when WE WIN!!! Come on home @49ers and let’s get it done at Levi’s!
Go NINERS!
❤️🏈❤️ pic.twitter.com/hZFpQJCh9t