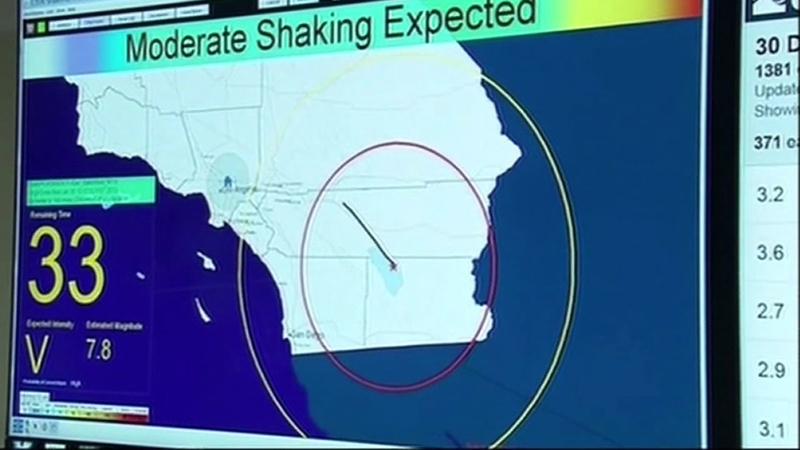 BERKELEY, Calif. (KGO) -- Doug Given with the United States Geological Survey, or USGS, estimates that broken buildings and twisted roads caused by earthquakes creates $5 billion in damage annually in the United States.

"So a $5 million investment is quite modest to help protect us from those earthquakes," said Given.

Given is speaking about the $5 million Congress approved to launch an earthquake warning system for the West Coast next year - a program that's been in the works for about a decade.

The Shake Alert System is currently a prototype, but the morning of the Napa quake, it sent out an alert that geologists believe made lawmakers take notice.

In an ideal situation, everyone along the West Coast would receive an alert on their cell phone.

However, the full warning system requires about $30 million to build and $16 million dollars to operate annually.

Senator Dianne Feinstein released a statement on Monday that reads in part, "An earthquake early warning system is essential to save lives, reduce property damage and protect critical infrastructure. We must get it done before the next major earthquake strikes."

"It's inexplicable given how much we have at stake here. Obviously these have been very tough budgetary times, but if you're going to invest in something that is significant down the road, this is about the best investment you can make," he said.

Richard Allen, the director of the seismological lab at UC Berkeley remains optimistic the rest of the money will come through.

"I think the private sector is just going to get more and more involved now that we're off the ground," said Allen.

Even once they get the full funding, USGS officials believe it will take two years for the full warning system to roll out.