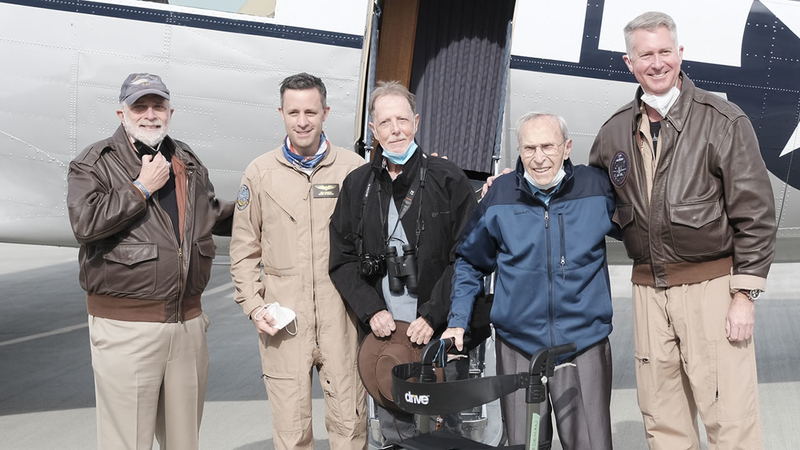 SANTA ROSA, Calif. (KGO) -- "Good morning, folks!" That greeting came from a man who has been saying it for more than 100 years.

When Del Tiedeman bid good morning to a gathering of reporters, he knew this morning would be better than others.

RELATED: US veterans to get free access to national parks, wildlife refuges and other public lands for life

It took just one look at a silver, old C-47 airplane outside Kaiser Air at Santa Rosa Regional Airport.

What does Veterans Day mean to Del?

"It's a little difficult to answer that one. I think of the guys who didn't make it."

Del flew these planes in World War II. He dropped troops D-Day, flew "The Hump" over India, and did it back. So did his company on Wednesday -- an elder 105.

VIDEO: Why is Veterans Day on November 11? What to know about the federal holiday

The origins of the holiday can be traced back to World War I, according to AccuWeather.

He, too, survived World War II and 35 bombing missions above Germany. So if someone wanted to say thanks on a Veterans Day, how would he do it?

Enter Joe Anderson of Sonoma County. He offered up a ride in his iconic plane as a memory trigger.

"I did this to honor my dad and uncles. Thank God they all came back," said Joe.

These wouldn't be long-haul flights. Just 20 minutes to the Golden Gate Bridge and 20 minutes back. For two centenarians, however, it offered a trip back in time.

Imagine the moment when Del moved from being a passenger in that plane, to the pilot, once again. He last sat in the left seat in 1944.

Del's description sounded more analytical. "When you go on a flight like this, you are thinking completely about the airplane, but when you do it every day, your mind wanders all around town."

After landing, as the flight party posed for pictures, a question came about. "If we hold our breaths can we take our masks off?"

They survived this long. What's a pandemic among men who survived so much more?

"If you live in this country you should be the happiest person in the world. There is no other place like it," said Al Maggini.

Wise words from old soldiers who have lived long enough to know and see better.

"I am overjoyed," said Del.