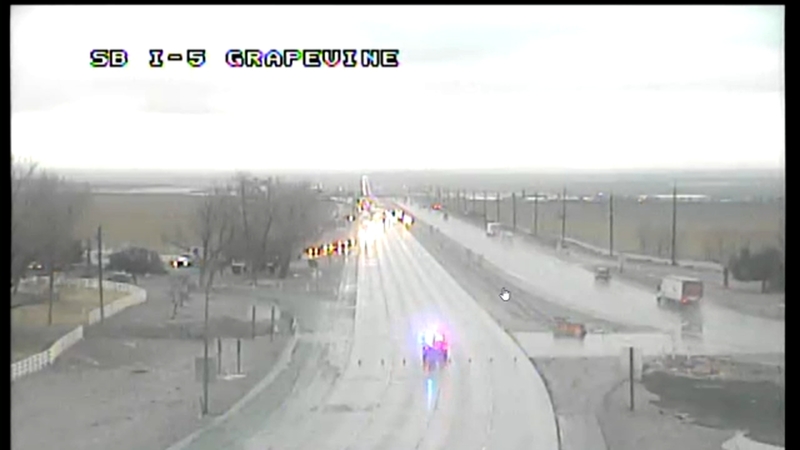 I-5 at Grapevine closed in both directions due to snow

FRESNO, Calif. -- The California Highway Patrol has closed both directions of Interstate 5 over the Grapevine as a storm brought snow to the pass.

Officers began pacing around 3 a.m., but shortly after 6:30 a.m. the pass was closed.

CHP officials say there had been several crashes in the area and drivers should expect delays. State Route 166 was still open as a detour.

Authorities have also closed State Route 58 over Tehachapi in both directions due to snow and ice.

"The weather can change up here really quick," says CHP Officer DC Williams. "This is a unique area, so just be prepared for the unexpected."
Williams says every warning serves a purpose, keeping drivers safe.

The Bay Area was blanketed with hail, snow and rain Tuesday evening as a chilly winter storm moved through the region.

Monday morning, the department tweeted about the chance of a closure and since then have been monitoring the weather constantly.

Kevin Paschall says he's been stuck in closures before, so he was prepared and hit the read early in hopes of avoiding a long commute and was still prepared.

"I looked up the apps and saw the potential closure, so I left early," he said.

Truckers like Luis Frontado drive from Los Angeles to Visalia daily.
He's been a truck driver for over 20 years and says being prepared and patient is his best piece of advice.

No one wants to get stuck on the Grapevine when making their way north or south on I-5, but during this chilly time of year, closures can happen at any time.

"It's challenging," he said. "Every day is different and you have to be prepared for anything that happens on the road. Being safe is my first concern -- not just for myself but the general public as well."

"Make sure you are driving at a safe speed," he said. "Make sure you follow at a safe distance so if it's raining and it turns into snow, you can react. Make sure you have a kit with water, blanket, snacks, and patience because of things go bad, traffic can back up real quick."