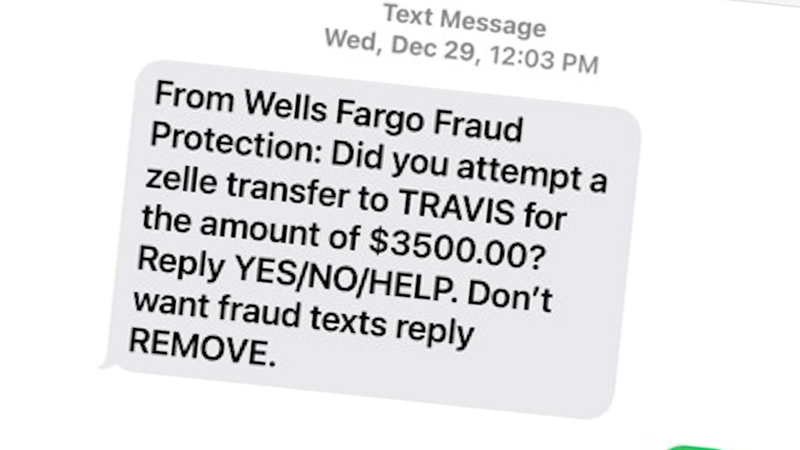 CONCORD, Calif. (KGO) -- ABC7 has been reporting about a widespread scam using the popular Zelle quick pay app to steal money from Bank of America customers.

Now that scam is rearing up again -- and targeting Wells Fargo customers.

Several came to 7 On Your Side's Michael Finney, who decided to shed light on their stories.

The scammers are using the same tactics they did before, but this time they're posing as Wells Fargo bank employees. They claim to be helping victims stop fraud. But really, they're tricking them into sending money to the crooks.

Cynthia Marin of Concord is still in disbelief. She was convinced it was her bank on the phone, helping her stop fraud, and sending her money safely back to her account.

Instead, it's all gone. "The money is gone. Gone. It just disappeared. Yeah... all the money's gone," she said.

Like so many scams, it began with a text.

"And they were asking me if I had approved a Zelle transaction... and I said no," Marin explained.

Right away, her phone rang. "The number was from Wells Fargo..." Marin continued.

A woman on the phone said someone was withdrawing her money - she had to stop it fast.

"They told me to go on Zelle and... transfer money to myself," Marin said.

Criminals are targeting other bank customers, in addition to Bank to America, tricking them into sending them money through Zelle.

The woman told her to cancel the phone number on her Zelle account and instead put in her own name.

It seemed legitimate. The message said Cynthia was now a Zelle recipient and seemed to show she sent herself $1,000, and then, $700.

"It clearly shows the money was deposited in my account," Marin said.

But it wasn't. Instead, it was going straight to the imposters, using her name to receive her funds.

"When I went to go look, I had six dollars left," she said.

This scam is nearly identical to the one that hit thousands of Bank of America customers last fall. Now the scam is hitting Wells Fargo customers, like Marin and Kelly Reynolds of San Jose.

"I was home on a Saturday night," Reynolds explained. She too got a frightening text that said, "Wells Fargo bank fraud alert... did you attempt a Zelle payment?"

"You see that $3,500 and your heart just sinks." After being caught in a scam targeting Bank of America and Zelle users, one school nurse was tricked into transferring thousands of dollars to fraudsters.

"And I said no. And then, almost instantaneously, I received a call that said, 'Wells Fargo Fraud Protection,'" she said.

A man on the phone said someone was draining her account.

"It was complete panic, all my money for my bills are in my account," Reynolds said.

The man said she'd better quickly reverse the fraudulent transactions. "He said I had to go into the Zelle button on my Wells Fargo app. And I had to remove my phone number," she said.

Reynolds was skeptical. "I said 'How do I know you're from Wells Fargo? You could be anybody...'"

The man told her to check the caller ID on her phone. It showed the real Wells Fargo phone number.

But it was fake. Scammers had "spoofed" the caller ID.

She also Googled the name the man gave her when he'd called, and it was a real Wells Fargo bank officer. However, the man on the phone wasn't really the bank employee.

Reynolds didn't know that either.

So she followed his instructions, transferred her funds, and read him the transaction code.

"As soon as I gave him the code, the phone conversation disconnected," she said.

And her money was gone.

"Wiped my account out. Had a zero balance," said Reynolds.

She called Wells Fargo right away. "I've been a customer for over 15 years, they'll do something for me, they'll figure this out... and they really didn't..."

Marin and Reynolds both say Wells Fargo did little to protect their funds.

Bank of America has offered refunds to only some of the victims of a scam that uses quick-payment app Zelle to transfer funds out of their accounts.

"I thought I would be completely protected, especially through a scam," Marin echoed.

"It was like, 'Oh well you lost the money,'" Reynold said. "'Well you authorized this.' Well yeah, why would I purposely lose my money?"

Each filed a claim. Each was denied. Wells Fargo said their Zelle payments were "processed as requested" and so they would not be receiving any refund.

Bank of America has also rejected claims by victims of the Zelle scam, saying they "authorized the transactions" and Zelle offers "no fraud protections."

The Federal Electronic Fund Transfer Act requires banks to refund consumers for fraudulent money transfers. When ABC7 pointed that out, Bank of America did refund some customers.

Wells Fargo did not. The bank told 7 On Your Side:

"It's disheartening that scammers are actively pursuing and defrauding victims, and we understand the frustration and anger expressed by victims. Since Zelle is an immediate form of payment, recovering funds for scam victims typically isn't possible."

"They truly, truly did nothing," Reynolds said.

"Whether I have $1 in there, or I have a million dollars in there, I should be protected," Marin agreed.

Scammers are using the fear of rampant banking fraud to lure their victims. It cost one man half his life savings.

Many victims say they had no idea a caller ID could be fake - but scammers do it all the time. It's called spoofing. Don't believe the caller ID, even if it seems to be your bank.

Scammers also can easily send phony text messages. So if you get a call or fraud alert that seems to be from your bank, do not respond. Instead, call your bank directly.

Many consumer advocates say banks should be refunding consumers for these fraudulent money transfers, but banks usually take the position that the payment to the scammer was authorized by victims, and not the bank's fault.

Advocates say federal laws should protect consumers in these scams since they were tricked into giving away their funds and banks are supposed to protect their customers' accounts.

They want the Consumer Financial Protection Bureau to crack down on banks for not refunding customers or putting more safeguards for Zelle transfers.

Wells Fargo says it does investigate each case. Their full statement is as follows:

It's disheartening that scammers are actively pursuing and defrauding victims, and we understand the frustration and anger expressed by victims. We don't want anyone to fall for a scam, and we want to make sure everyone is aware that criminals can spoof a caller ID number so it appears as if a call or text is from your bank. To be safe, don't respond. Reach out to your bank using legitimate sources, such as the number on the back of your debit card.

We are actively working to raise awareness of common scams and to remind customers that Zelle transfers are immediate, and should be treated just like cash. At the same time, we continue to update and strengthen our practices and procedures for combatting and helping prevent scams.

We also are committed to following all regulations governing transactions, including Regulation E. It is a priority for us and our industry.