Nitrous oxide can cause serious neurological damage, even death.
KGO
By Dustin Dorsey 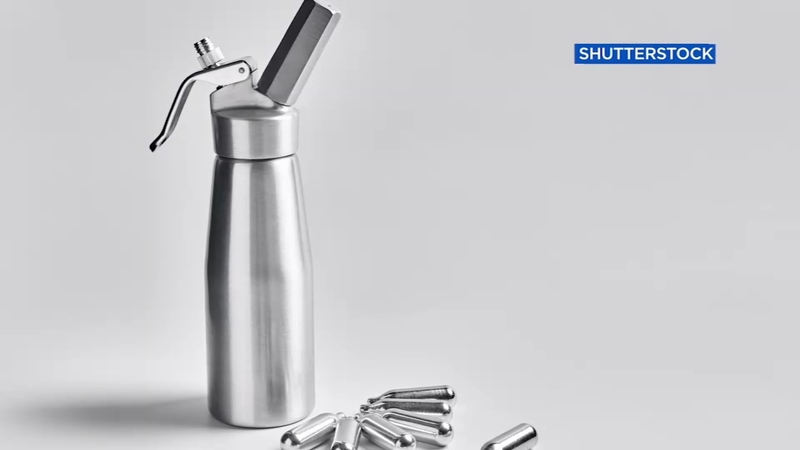 South Bay cracks down on illegal use, distribution of 'whip-its'

SAN JOSE, Calif. (KGO) -- A common baking tool has another use as an inhalant drug, and city and county leaders in the South Bay want the public to be aware of the damages it causes.

"Whip-its" are canisters of nitrous oxide used for making whipped cream, it is illegally inhaled or huffed.

Drug use has been blamed for destroying families across the Bay Area, and you may not know about the drug use until it impacts someone you know or love.

That was the case with De Anna Mirzadegan and whip-its.

"Many kids think that it's safe, so they're looking for a high that they think is safe," Mirzadegan said. "But it's not safe. So they're fooled by it and it is addictive."

Nitrous oxide can cause serious neurological damage, even death. People have been using it for decades.

"It's a much larger issue than people realized," Mirzadegan said.

Now, South Bay leaders are working together to curb the issues this drug can cause.

While the canisters are legal to purchase for cooking purposes, some smoke shops do sell them.

So city leaders want to educate the public and crack down on where they are sold.

"Obviously, most bakers aren't going to vape shops to get their whipped cream canisters and that's really why we need to close this loophole," Davis said. "Places that are selling inhalants should not be selling nitrous oxide. It is not a safe inhalant."

Police tell us they will work with city leaders on inspections of where whip-its are sold to address issues of illegal distribution.