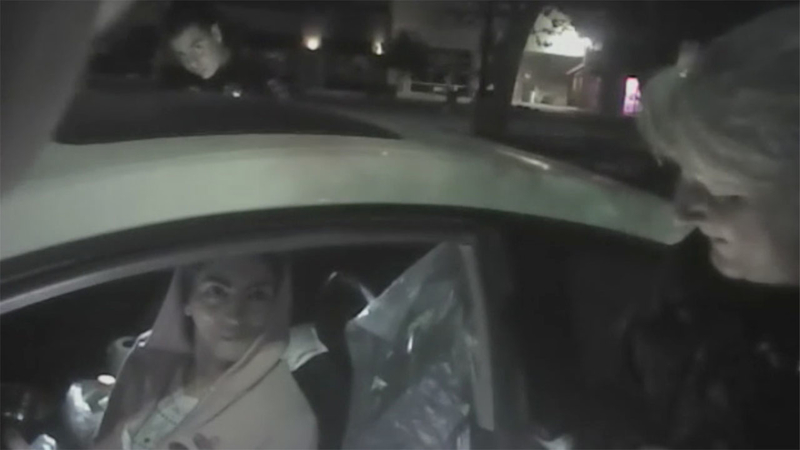 MOUNTAIN VIEW, Calif. (KGO) -- We are getting a first look at the Mountain View Police Department's encounter with the YouTube shooting suspect the morning of the attack.

Police released unedited video today as two officers made contact with Nasim Aghdam asleep in the back seat of her car in a parking lot. Eleven hours later on April 3, police in San Bruno said the 39-year-old was the person who shot employees at YouTube headquarters about 25 miles away.

The Mountain View police video begins at 1:38 a.m. in a parking lot where an officer was checking for stolen cars often left in a superstore parking lot. A white Pontiac came back associated with a missing person's report.

The video shows how the officer first had his dispatcher obtain more information from San Diego County where Aghdam had been reported by her family as missing. The report listed Aghdam as "at risk." Only after more information was received and a backup officer arrived did the officer approach the vehicle and make contact with Aghdam.

In the video, Aghdam is seen asleep in the back seat. "Are you Nasim? You're reported as missing," the officer said.

Aghdam was cooperative, providing her ID and explaining that she had left home because she was not getting along with her father. She told police she did not tell her family where she was going.

The dialogue with police lasted about seven minutes and did not raise any concerns by the officers, who appeared to have a good rapport with Aghdam.

Katie Nelson, public information officer for Mountain View Police, said its officers are trained to detect if individuals being questioned are being truthful or might have mental health or medical issues. The dialogue did not seem to raise any suspicion by the officers. The backup officer has 20 years' experience with Mountain View Police, while the other officer has less experience. Their names are not being released by the department.

Aghdam's father, Ismail Aghdam of San Diego County, was contacted by Mountain View Police that she had been found and was all right. They also relayed the daughter's wish that she did not want contact with her father. An hour later, police say Ismail Aghdam called them back and said that Nasim was upset with YouTube. However, PIO Nelson said that officers did not re-contact Nasim Aghdam.