"I didn't want to take my hands off my neck. I just sat there waiting to die."
KGO
By Dion Lim 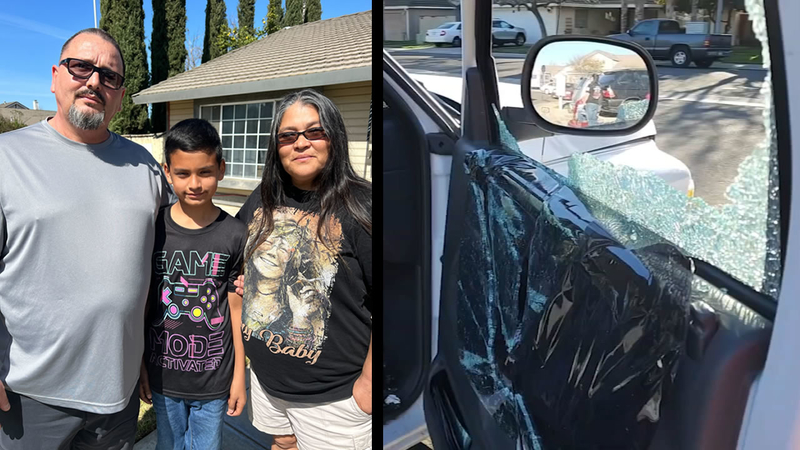 LIVERMORE, Calif. (KGO) -- For the first time, we're hearing from the man shot on I-580 in Livermore on February 27. He and his family believe the fact he is alive is nothing short of a miracle.

The fact Christopher Delacerda is even able to talk and share the traumatic events of what happened to him while driving that stretch of freeway is simply remarkable.

"I was driving, the bullet came in here, exited, hit me here, came out my jaw... through the other window," he explained.

The reminders are still apparent on his white pickup truck, parked outside his Ceres home. He points to where the bullet shattered the glass and to the bloodstains that just will not come out on the seats and seatbelts.

Christopher, a die-hard Raiders fan who is originally from San Jose, was driving his wife Claudette Villavon and two grandsons to the flea market that morning. That's when he noticed a man driving erratically.

"I've seen people drive crazy before so I didn't think nothing of it. My focus was to get away."

But in a split second, his windows shattered. Christopher had been shot.

"I was able to make it to the side of the road and put it in park and yeah basically sat there. I didn't want to take my hands off my neck. I just sat there waiting to die," he said with tears welling up in his eyes.

Eleven-year-old Nicholas Delacerda, who was in the back seat, says he heard his grandma scream.

"I tried to unbuckle my cousin and put him on the floor."

Nicholas shielded the 3-year-old from the chaos.

"Nicholas jumped on top of him," says Claudette.

RELATED: CHP arrests suspect in connection to weekend freeway shootings, including one on I-580 in Livermore
EMBED More News Videos

The CHP confirmed that it was a freeway shooting that caused Westbound I-580 in Livermore to temporarily shut down on Sunday.

Christopher spent five days in the hospital. He says doctors believed he was lucky not to have suffered any speech problems, or nerve damage. Despite an issue with his saliva glands and soreness in his arm, he is mostly out of the woods.

"I still can't believe it. I still have thoughts about it, I have a hard time sleeping. Every time I close my eyes - boom - something blows up, I hear the windows blowing."

While it'll still be a while before he returns to the roads for his job as a truck driver, he and his wife aren't letting this incident stop them from living their life. He is making this call to action with his story: "I would like to see more highway patrol on the freeway that's for sure...maybe they could use more cameras or something."

"Our bond definitely without a doubt, our bond is much stronger," smiles Claudette.

Armando Perez, 24, was arrested about 15 minutes after Christopher was shot.

The CHP says Perez is also accused of critically injuring another person in a shooting just 30 minutes earlier on interstate 205, near I-5 in Tracy.