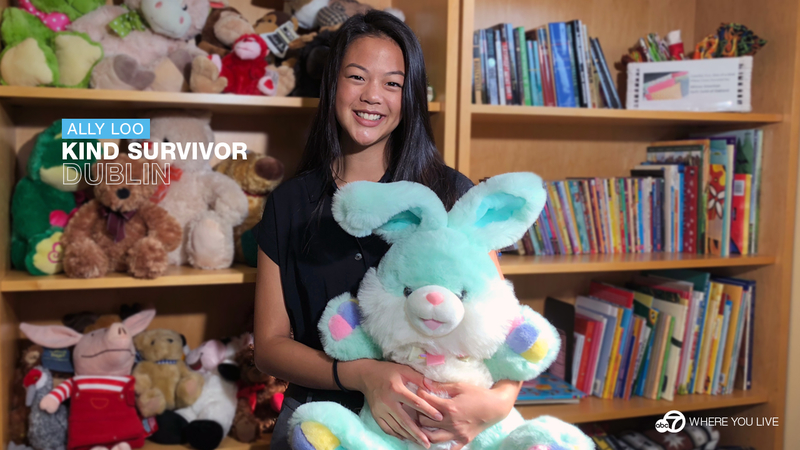 SAN LEANDRO, Calif. (KGO) -- An 18-year-old student from California is comforting thousands of abused children by donating toys. The college freshman is helping young children overcome adversity by sharing her own personal journey.

Dublin native Ally Loo been donated stuffed animals to CALICO for two years. CALICO is the Child Abuse, Listening, Interviewing, and Coordination center. The center is located in San Leandro and is meant to help abused children heal and get justice.

"I was first introduced to CALICO when I was 7 years old when I was sexually abused by a family friend," she explained.

"I think it was very hard for me to understand what was going on, but all the CALICO workers here are trained to work with kids and they showed me love and helped me understand it, helped me stay calm while everyone around me was being hectic," Loo said.

CALICO Center allows children involved in crime to be interviewed only one time rather than by multiple agencies.

"Before there were centers like CALICO, children were interviewed on average up to 21 different times by 17 different people, which was asking those children to relive the worst moments of their lives, 21 times," says CALICO's Executive Director Erin Harper. "What happened is children would end up saying, 'nevermind, nothing happened' or 'I don't want to talk about it' not because nothing really happened but because they were being re-traumatized."

The center is kid friendly.

"It's a colorful room, the furniture is more appealing, you have stuffed animals, it's a warm environment and something you'd find in your home," says Lieutenant Isaac Benabou, Commander of Criminal Investigation Unit at San Leandro Police Department.

When children go to CALICO they receive a blanket, book and a stuffed animal.

Loo has held onto her stuffed animal for more than 11 years. It served as comfort when she was a kid, but now serves as inspiration for her volunteer work as a young adult. Ally is working starting her own nonprofit group that distributes toys.

"She's really special," says Harper. "We've had some people who have come on a one time occasion, but no one who has consistently come through here and consistently wanted to give back the way she has. She's come back for several years now with teddy bears. She's just an incredible girl."

Loo is an ABC7 News STAR for her kindness and strength.

PHOTOS: Meet the stars where you live


The 18-year-old is now a freshman at University of San Francisco studying nursing.