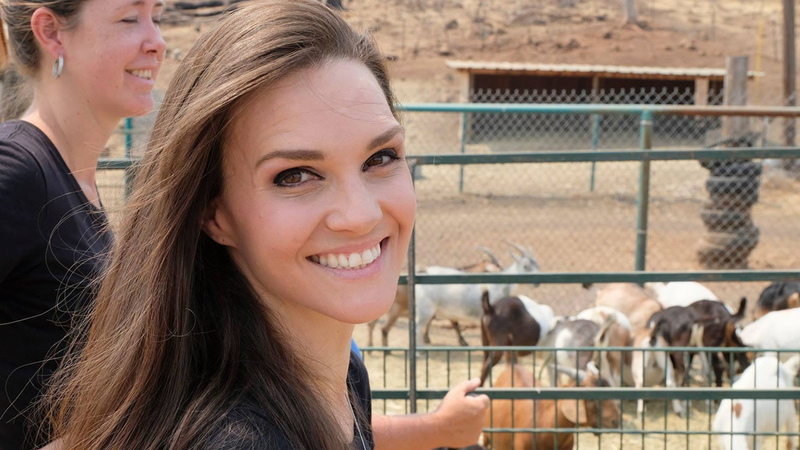 LAKE COUNTY, Calif. (KGO) -- From Lake County, there's an inspiring story about a young woman saving the world one animal at a time. And with fires burning, they need her.

"Come on!" she shouted at the cows. Shelina Moreda was frustrated because they would not load into a trailer, but this is the kind you like hearing about.

"They don't naturally go in the trailer?" we asked.

"No, they don't naturally go in the trailer," she replied with a look that could kill.

RELATED: CoverGirl hailed as hero for her actions during Wine Country fires

If these animals had words, they could tell you how Shelina and this crew rescued them from fiery deaths. And how they're making a habit of it.

"We started a nonprofit in the middle of the Santa Rosa Fires. NorCalEvac.com."

If, having seen her, you're thinking the gritty work and the face do not go together, get ready to rearrange your assumptions.

"Yep!" Then she broke out laughing because this is a farmer's daughter who happens to race motorcycles at 180 miles an hour and who has the face of a CoverGirl because, well she is one. In the commercial, Shelina asks, "Is it tough competing in a man's world? Maybe for a man."

"They wanted something different when they signed me. And they got it."

In this case, a woman who, in the past couple of weeks, has worked on three hours sleep a night, saving some 100 animals by now. "We pulled a dog who burned. Even his paw pads were coming off. And when you see that, you can't stop..."

It was just one rescue among many, with a subject who could be bigger than this story if she wanted. Shelina Moreda does not. "You have to help. Step up and help people out. It's what everyone is supposed to be doing and we don't do it enough."