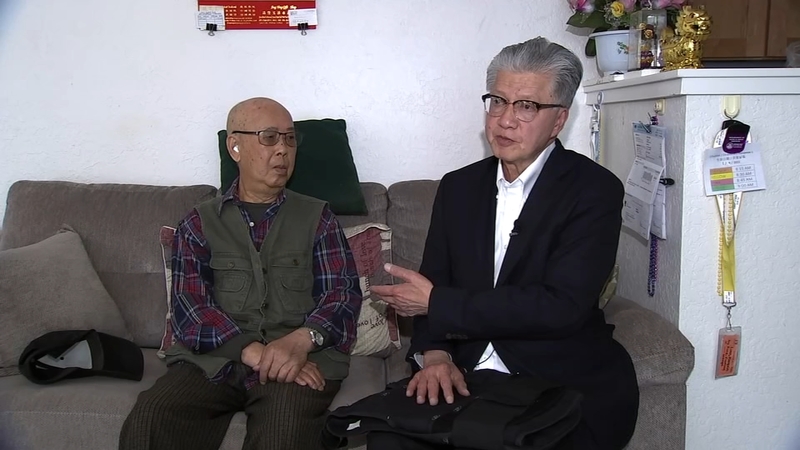 SAN FRANCISCO (KGO) -- Two seniors, both crime survivors, met to show support for each other and to speak out against the San Francisco DA's office Monday. The two men, who are Asian, say despite the crimes being very different, the problem with the justice system is the same.

As soon as the 69-year-old Anh Le and 85-year-old Rong Xin Liao met at Liao's residence in San Francisco Monday, you could see an instant connection. The two, greeting each other in various languages embraced and at times held hands as if they had known each other a long time.

“Asian American victims…in SF we have been treated like garbage”

But the circumstances that brought them together are a bit alarming. Those circumstances are what compelled Le to bring a bulletproof vest to their meeting which he plans to wear in public now.

One week ago, Le filed a lawsuit alleging the San Francisco District Attorney's Office violated Marsy's Law, which gives victims right, including being informed of developments in their case.

Liao believes the same thing happened to him after he was kicked out of his seated walker while waiting for the bus in the Tenderloin in February of 2020. He suffered a brain bleed.

…about his perpetrator, Eric Ramos Hernandez being released on mental health diversion.

This was the moment Liao was kicked. It is hard to watch, but illustrates how serious this case was.
⁰Ramos-Hernandez re-offended and was put back in the program in Dec. #StopAAPIHate pic.twitter.com/XcuAqJJ8Vp

Speaking through an interpreter, Liao said "we feel helpless...we feel like we are all victims."

Police documents show on Nov. 2, 2019, Le cautioned a boy who was riding his bike on the sidewalk to be careful. That's when the 11-year-old allegedly lashed out with a bat.

"It was solid. And after he started hitting me, repeatedly, it hurt me very much." Said Le.

Documents show the boy's father, Jimmy Tanner then chased Le and threatened to hit him with a glass bottle. After Tanner was arrested, Le says the DA's office failed to inform him ahead of time of plans for a major development.

An image f/surv video used in the police investigation shows Tanner standing up in an incident where he allegedly pushed a bottle into a victim’s nose.

Liao is not surprised by Le’s story. He has long alleged the DA’s office never communicated w/him & his family… (5/10) pic.twitter.com/vXwDhTYNbR

"They allowed the gentleman to plead to a misdemeanor with one year probation" says Le.

Last week, the DA's office called Le's claims "false" and said they reached out to him "by phone, email and mail over two dozen times" and doubled-down in an email to me Monday saying that "the advocate reached out repeatedly before the case resolved...but did not hear back from Mr. Le."

There is outrage over San Francisco District Attorney Chesa Boudin's description of the man police say pushed over and killed an 84-year-old in San Francisco.

Le said the emails were "very confusing and unclear."

A court transcript from July 28, 2021 shows the judge in the case agreed "The DA's office should have notified you because that's the law. That's Marsy's Law."

Tanner's public defender also described his client as "severely disabled" and wheelchair-bound, in an interview with the Chronicle. However, an image from surveillance video used in the police investigation shows Tanner standing up during an incident where he allegedly pushed a bottle into another victim's nose.

Police documents also show Tanner and his family were seen in other attacks, primarily on Asian Americans the very same day Le was attacked.

An Asian American woman is sharing her story of being attacked, robbed and bitten by her perpetrators while out for a run in SF's Pacific Heights.

These developments do not come as a surprise to Mr. Liao, who has long alleged the DA did not properly communicate with them on developments in his case. He and his family said they were blindsided at his perpetrator Ramos Hernandez's release on mental health diversion.

Ramos Hernandez re-offended and was put back into the program this past December. Documents show the DA's office did make contact with the family a number of times, though the documents were so heavily redacted, the details could not be read.

As both men, continue to live in fear for their safety- Liao says one thing is certain.

"I want the DA's office to actually do what they're supposed to do. If they try to cover it up or ignore it and not do their job. This wave of Asian crime will not be able to stop and will be even getting worse." Says Liao.

As for Le, his court complaint shows him wanting only two things: an apology... and for his perpetrators to learn about Asian American history.