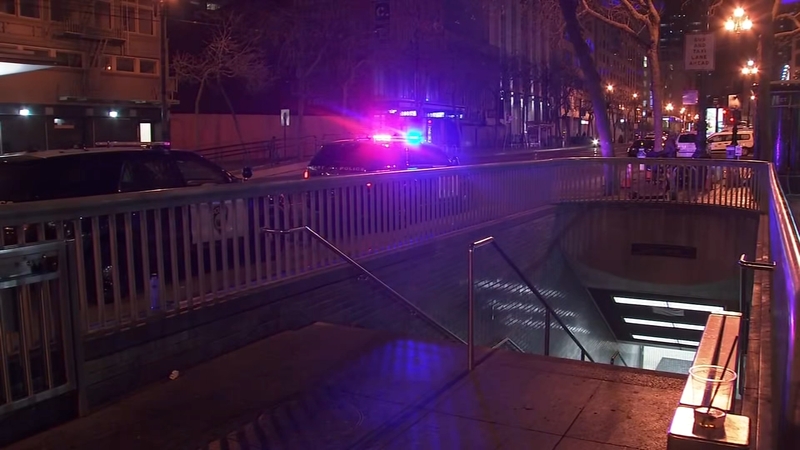 SAN FRANCISCO (KGO) -- One person has died after a shooting Thursday night at the Civic Center BART station in San Francisco.

BART police say the suspect, identified as 24-year-old Shane Holman of San Francisco, followed the victim down the escalator and shot the victim from behind with a handgun on the platform.

Six BART police personnel were on the scene within one minute of the incident, BART Police Chief Ed Alvarez said. The officers rendered aid to the victim and took the suspect into custody. The victim died after being taken to a hospital, BART police said.

ABC7 News obtained court records and multiple sources confirm, Holman was on probation for a November 2020 incident where he was arrested for attempted burglary.

Holman was also arrested in March of last year, for being a felon in possession of an unregistered firearm. ABC7 News asked the San Francisco District Attorney's Office why he was charged, then released back onto the streets.

Public information officer Robyn Burke acknowledged Holman's release and says it happened while they waited on DNA evidence results. Burke added in part, the office "will hold the suspect accountable."

Meantime, BART's police chief says overall crime across the BART system is down but admitted problems at Civic Center and what was being done to address it.

The Independent Institute has awarded BART the "California Golden Fleece Award." The award exposes waste, fraud, and abuse in government.

"We have two full-time officers at that station at all times and two community officers as well," said Chief Alvarez.

For riders we spoke with, it wasn't enough.

A man who asked to be identified as Giovanni said, "This station gets very sketchy sometimes. I see people with knives, people with sticks inside. It doesn't give me a comfortable feeling."

Gregory Foley also rides BART regularly for his job in the Tenderloin.

Violent crime on BART, including robberies and aggravated assaults, has increased by 115 percent over the last five years, a new report says.

"Of my clients, I work with, the elderly are frightened to go anywhere close to BART," said Foley.

These concerns, add to their hesitancy to ride more.

A motive for the shooting remains under investigation.