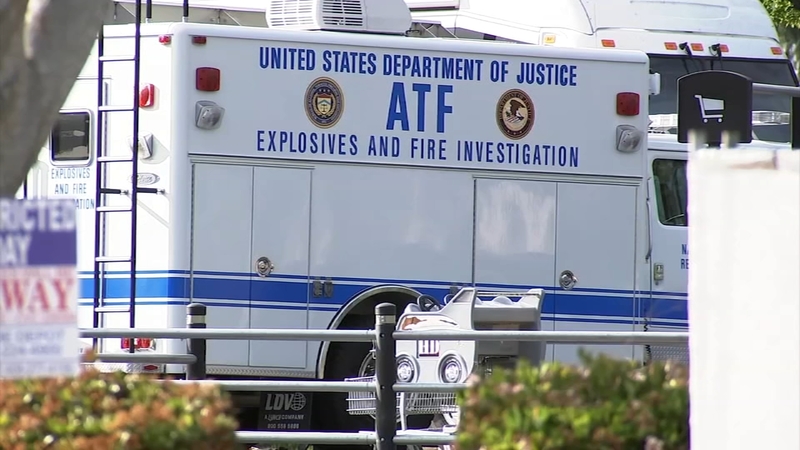 SAN JOSE, Calif. (KGO) -- Members of the Bureau of Alcohol, Tobacco, Firearms and Explosives (ATF) National Response Team (NRT) are on the ground in San Jose, helping the fire department find the cause of Saturday's massive blaze that destroyed a Home Depot on Blossom Hill Road.

On Wednesday, ABC7 News spoke with several people who were inside the building when the fire ignited.

"When you see fire and- threatening fire- big chunks of burning stuff falling, it feels like it's gonna get you," Jeff Baham told ABC7 News.

He and his wife were in line for paint when an employee alerted them about a fire inside the store and directed the couple and others to evacuate.

The Home Depot fire was also hectic for Wagly, a veterinary hospital and pet campus next door where dozens of animals had to be evacuated in a hurry.

Baham said shortly after, a similar announcement went over the store's PA system.

"There wasn't panic. No one seemed panicked," he added. "I think it might be because there were no fire alarms. You know, we didn't really know how serious it was."

"But everyone knew, time to go! There's a fire," Baham said.

Several witnesses shared identical reports, confirming there was no sign of active sprinklers and no immediate fire alarm.

"I was quite literally at the back of the store- as far back as any customer could go without going into the loading dock. I made my way all the way to the front, and it wasn't until I got to the middle of the parking lot that the fire alarm finally went off," witness Rick Garcia said. "And it only went off three times. It was like, 'ehh, ehh, ehh,' done. That's it. And by that time, everybody was already out."

Garcia said he was only feet from where he believes the fire started, in an area with roofing and building material.

"There's wooden doors, there's roofing material," he described. "So you're talking about tar, tar paper, adhesives. There's also insulation back in that area."

Garcia is adamant there was no working fire suppression system, and explained that for days, he's tried to get information to investigators on-scene.

"This is the third day I've come back now because I just felt like I needed to say something," he said. "I feel like I was the closest person to where the fire started without being directly in front of the fire."

"I had to tell two gentlemen in front of me- they were Spanish speakers- so I had to let them know in Spanish, 'Hey there's a fire. We need to go,' because they didn't understand what was being said over the PA system," Garcia said. "Had the fire alarms gone off, doesn't matter what language you spoke- you know that's not a good thing."

"We're all fortunate- very fortunate that we got out of there," Baham told ABC7 News. "But if someone wasn't paying attention or something- to really what was going on... or maybe they were in the restroom or something and didn't hear people running around saying, 'Everyone get out of here,' without the fire alarms blaring, that could've been a different situation for them."

Baham added, "Everyone got out, so I feel like I can be a little more introspective about it since everyone was safe. But I do kind of wonder why there was no fire alarm until the fire was already coming out- coming off the ceiling."

Video taken at the scene showed the final calls to get the building cleared. In the end, no injuries were reported from the raging fire.

"Just to capture that and show how quickly the store went from, you know, a normal Home Depot to an inferno was pretty astonishing," Philip Hurst told ABC7 News.

Witnesses commend Home Depot employees for getting everyone out of the building.

"I don't know why someone didn't just trigger a fire alarm, you know? But be that as it may, they did rush us out the door." Baham shared, "I give big credit to the Home Depot employees who got us to take them seriously and leave."

"Thankfully, the Home Depot employees were- they were on top of it," Garcia said. "People got out of there because of the employees."

In a release, SJFD's Chief Robert Sapien, Jr. said, "San José Fire Department is grateful to the ATF NRT and the resources they bring to this investigation."

"Agents from SJFD and ATF will work collaboratively and expeditiously to gather witness statements and thoroughly investigate the cause of the fire. SJFD remains the lead agency on this investigation and appreciates the support customarily offered by the ATF NRT on incidents of this magnitude," the release continued.