Officials want to know why equipment, including a crane, was on the tracks at the time of the collision.
KGO
By Cornell W. Barnard, Tim Johns 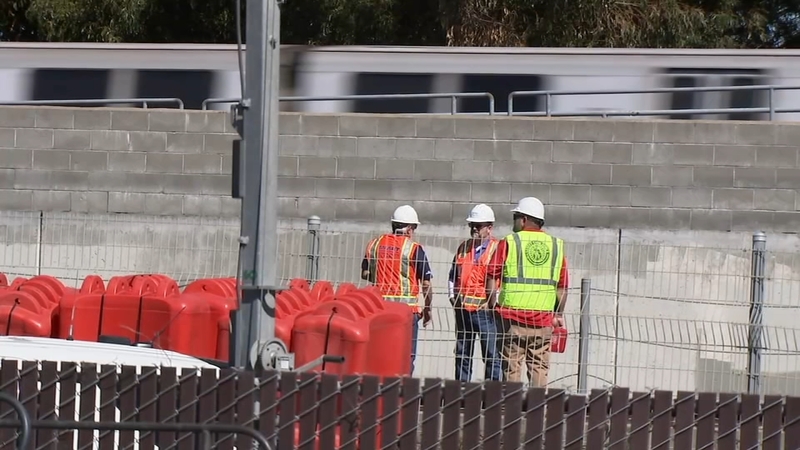 Their goal is to figure out what went wrong Thursday morning when a Caltrain commuter train crashed into a equipment left out on the tracks, including a crane, used to install electrification lines overhead.

"There was a truck and two equipment trains which were working to install the electrification system," said NTSB Vice Chair Bruce Landsberg.

The team was seen combing every inch of a crash scene Friday, saying they'll be here for the next several days collecting evidence on scene and launching a thorough investigation.

The biggest question for investigators -- Why was the equipment sitting on the tracks during the late morning commute? They want to find out why the positive train control, a system that's designed to prevent accidents like this one, didn't work.

"We're not going to know until the investigation gets further along," said Caltrain spokesperson Dan Lieberman.

But, "We can confirm that positive train control was on and active on the accident train at the time and day of the accident," said John Manutes, the person leading the investigation for the NTSB.

The agency says it will release a preliminary report in the next three weeks, followed by a complete report anywhere from 15 to 18 months from now.

Thursday's collision caused a fire which injured 13 passengers, sending five to the hospital including two Caltrain employees. None of the injuries are life-threatening.

A truck was also involved in the collision. During a press conference Friday, officials described what happened:
"The driver who was in the truck, the foreman, saw the train coming and jumped out of the truck and got most of the other workmen out. The one who was injured the most, as far as we know, was one of the crane operators and he either didn't hear or didn't get out. One of the vehicles had the fuel tank punctured and that was the source of the fire. The fire did not originate as far as we know right now, from the locomotive itself," a spokesperson said.

Caltrain passengers described what they felt and witnessed after a fiery crash between the train and the vehicle.

Passengers say the impact of the crash was terrifying.

"It was scary for everybody, everybody got pushed, we were anxious to get off," said Elizabeth Tom.

Any possible damage to both southbound and northbound tracks is still being assessed. Once NTSB leaves, Caltrain says it will get to work clearing the tracks and restoring service to the effected area, but that it currently has no concrete timeline.

"It's difficult to tell at this time. Ultimately, until we get the train out of there, it's difficult to fully access the situation. But once we have that moved, we're going to do everything we can to move through quickly and safely in order to get service restored," said Caltrain spokesperson, Dan Lieberman.

Caltrain is now operating a bus bridge on a modified schedule to get passengers around the crash scene.

At least 13 people have been injured after a train slammed into a large truck in San Bruno Thursday morning, firefighters said.

"My reaction was it could have been any of us, we ride the train expecting it to be safe, the last thing you expect is something to go wrong," said commuter Francis Ray.

"We're glad none of the injuries life threatening, our sympathies go out to people affected by this we hope they make a recovery. Beyond that, we are eager to get service restored and the investigation can move on so we can find out what happened, so this doesn't happen again," Lieberman added.

"It was a very scary moment for everybody. Everybody kind of just, you know just pushed, not pushed their way through, but we were all very anxious to get off the train as soon as possible," said Elizabeth Tom, who was on the train when it crashed.

But Caltrain officials are assuring people their trains are safe and ready to use.

"Ultimately, Caltrain has a long and storied safety record. What happened yesterday was absolutely an aberration and a surprise," Lieberman said.