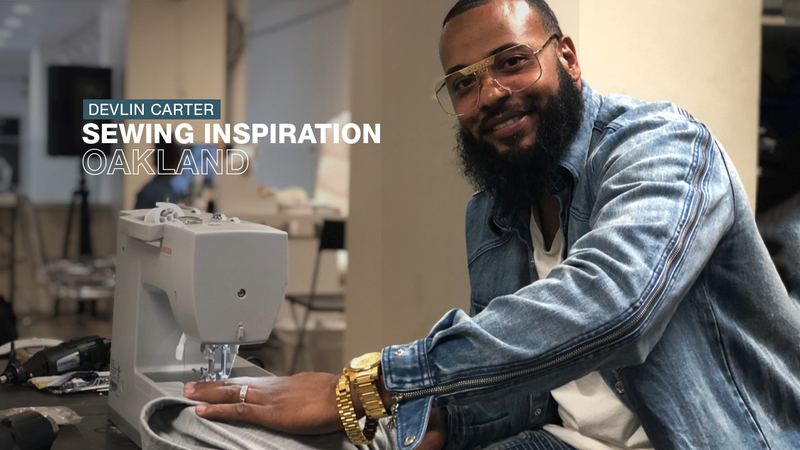 OAKLAND, Calif. (KGO) -- Fashion and footwear designer Devlin Carter's sneakers have blown up on Instagram. His unique style has gained the attention of thousands of people and celebrities all over the world.

Carter is a product of the power of social media. "Yes," Carter said. "You know if it weren't for social media, I probably wouldn't be as successful as I am."

Inside Carter's Oakland show room, you'll find his designs. But, upstairs on the weekend, a fascinating operation is underway. He's teaching kids how to sew.

"These schools don't even have arts and crafts programs anymore," Carter said. "So, we have a lot of black and brown kids who don't have an outlet to be creative."

His students are doing everything from bleaching shirts to distressing fabrics. Inside the class, you feel like you're walking amongst the future of fashion.

"When I was younger, my mom sewed and I never sewed," Carter said. "I never learned how to sew from her. I taught myself later in life because I thought it was for girls."

Looking forward to introducing you all to a man making a positive influence on the #culture tonight on ⁦@abc7newsbayarea⁩ at 4! Devlin Carter is a designer and in his spare time teaches classes where children learn to sew! He has an inspiring message 👌🏾 pic.twitter.com/4CT8C7oKIB

Carter's path to his career in fashion is much like the zig-zag stitch he was teaching when ABC7 News visited his class. Carter dabbled in customizing sneakers in college, but it eventually fizzled. He then joined the U.S. Coast Guard and ended up in the Bay Area.

"I went to FIDM," Carter said. "Which is the Fashion Institute for Design and Merchandising in San Francisco. Literally this is the crazy story that people don't really know."
Carter's students are thankful for his service and the career change.

"The class is cool," Jeremiah Sims, a student said. "There's a lot of cool spirits in here. You know everyone is creative."

"I learned how to control my foot on the pedal because the last time I did it I stomped on it and messed up the whole thing," Corey Hawkins, another student, said.

Carter is the definition of self-made. He designs his own samples, his shoes can only be found in his store, and says his sewing classes are all about passing on his blessings.

"Hopefully one of these kids, when they get older, they'll do it," Carter said. "And they'll do it. And the cycle continues where we're looking out for each other."