There have been over 215 freeway shootings in California since 2018, data shows

The death of Jasper Wu was one of at least 215 other freeway shootings across California from 2018 through March of 2022.
KGO
By Stephanie Sierra and Lindsey Feingold 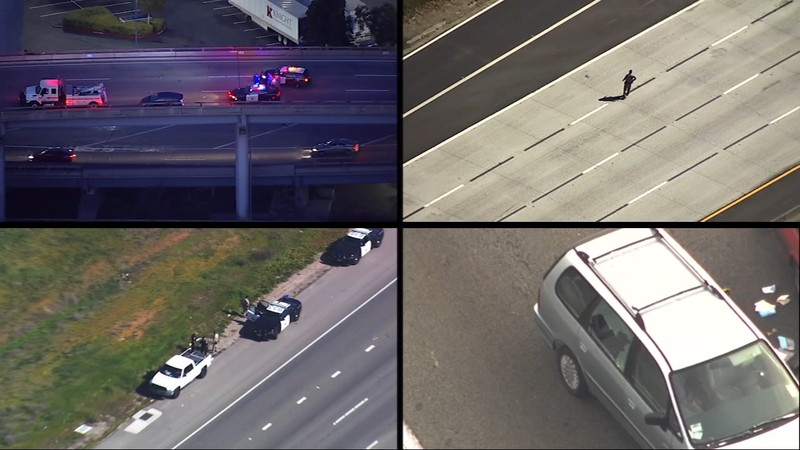 SAN FRANCISCO (KGO) -- In early January, 28-year-old David Nguyen was shot and killed on I-580. The Alameda County Sheriff's recruit was a month away from graduating. Last week, a 7-year-old boy was struck by a bullet on I-80 near Vacaville and is still recovering. And most recently, another shooting on Wednesday night off I-580 overturned a car - killing two people and injuring another.

Gun violence is threatening our roadways across the nation - at least 2,838 shootings have killed and injured people along U.S. freeways from 2018 through March of this year, according to an ABC7 analysis. Eight percent of the shootings occurred in California.

"We were driving 60 miles per hour... and somebody shoot us down," said Cherry An, whose 23-month-old son Jasper Wu was killed last November due to a freeway shooting. She was driving on I-880 in Oakland on her way home to Fremont.

Jasper was asleep in the car when gunfire erupted and a bullet struck the infant in the forehead. The incident was due to gang crossfire.

"She miss Jasper so much," said An, through her sister translating in Chinese over the phone. "She doesn't want the same thing to happen to another family."

The death of Jasper Wu was one of at least 215 other shootings that threatened freeway drivers across California from 2018 through March of 2022. Around 39 percent of those happened in the Bay Area.

Over the course of several months, the ABC7 News I-Team combed through Gun Violence Archive data, which tracks the number of incidents on interstates using news reports and press releases. The I-Team found the interstates with the most shootings reported are I-580, I-80, I-880, I-680, and I-280. 79 shootings were reported on these freeways during the past four years.

But it's important to reinforce that figure only captures cases that made the news. The reality of the problem is much bigger. For example, the California Highway Patrol, the agency tasked to investigate these shootings, gave the I-Team data that shows the real figure of interstate shootings across the Bay Area is six times higher when looking at 2020 and 2021. The agency reported around 289 interstate shootings in the Bay Area during those years, versus 46 shootings reported in the Gun Violence Archive data.

"We've got to drive down the violence and reckless behavior we are seeing on California's highways," said Oakland Mayor Libby Schaaf.

Like in Wu's tragic case, most of these shootings occur in Oakland.

"In the last two years during the pandemic, we've seen both increases in shootings and homicides across the city and unfortunately it's been driven by group and gang violence," Oakland Police Chief LeRonne Armstrong.

Two people are dead from a shooting that led to a crash on eastbound Interstate Highway 580 in Oakland on Wednesday night, according to the CHP.

According to Gun Violence Archive data, the city had 27 interstate shootings reported in the news between 2018 and March 2022 - the highest number across the Bay Area - followed by Richmond, San Francisco, San Leandro, and Livermore.

"There have been a number of shootings related to group and gang violence, road rage, we've also seen some random firing of weapons... but in particular we've had sideshow activity that has made its way on the highway as well," said Chief Armstrong.

In one case in January, a reckless driver was spinning donuts across all lanes of I-880 that stalled traffic for hours.

"We are going to shut that down," said Mayor Schaaf.
Chief Armstrong says his department is working with CHP to crack down on these shootings. Armstrong believes enhancing technology on our freeways, along with adding signage to alert people there are recording devices, will help deter and investigate these crimes.

Following requests from Mayor Schaaf, the Governor announced funding to install 200 CCTV cameras on freeways spanning 50 locations across the state, including areas of Alameda and Contra Costa counties.

"We can assume probably a quarter of those will be in or near Oakland," said Schaaf.

The Governor's office confirmed to the I-Team cameras will be installed at specific intersections along the mainline of I-880, I-580, Highway 24, and International Blvd.

"I want people to know that we're watching," said Mayor Schaaf. "We will now have our eyes on the roadways."

Jasper was one of at least 14 people killed across the Bay Area from 2018 through March of this year, according to Gun Violence Archive data. At least 65 others were injured. In California, the data shows 62 people were killed in interstate shootings.