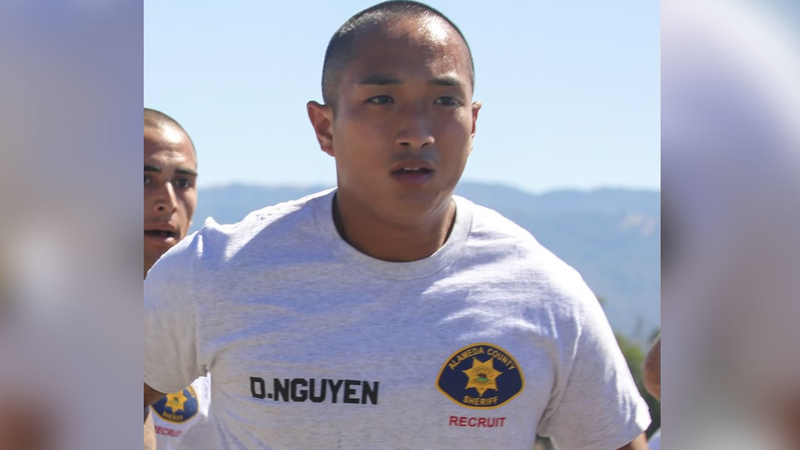 DUBLIN, Calif. (KGO) -- The young Alameda County Sheriff's recruit that was fatally shot on Interstate 580 in Oakland on Tuesday evening has been identified as 28-year-old David Nguyen.

"He was definitely going to be a great deputy and it is sad," said Robert Alvidres who served alongside Nguyen in the California National Guard.

He says he still remembers the conversations the two had as they were on watch during some of the civil unrest over the last two years in Sacramento. Alvidres, who is a deputy in Santa Barbara County, says Nguyen was eager to learn about being in law enforcement.

"He was so driven to not just become a deputy, and be in law enforcement, but was driven to be great in those positions and really make a difference," says Alvidres.

"Like I said he had a passion for it, sometimes those guys that have that passion they don't just stay at the bottom level, they move up and they make a difference somewhere, and unfortunately we know that's never going to happen," says retired San Francisco Officer Matt Castagnola.

The family of a toddler is heartbroken and wants the shooting suspect to surrender after 23-month-old Jasper Wu lost his life on Oakland highway.

Castagnola was Nguyen's criminal justice instructor at City College of San Francisco who wrote him a recommendation to get into the academy.

"I could tell he would have been a great police officer. I'm just shocked, I'm sad," says Castagnola.

"We located a Toyota Prius against the left wall," said Raul Gonzalez with California Highway Patrol. "Once our officers got to the vehicle we saw the victim suffered a gunshot wound."

Nguyen was shot and killed while driving home on I-580 near the Bay Bridge Toll Plaza. He drove his personal car and was not wearing any uniform associating him with the sheriff's office.

Nguyen was taken to the hospital where he later died as a result of his injuries.

The Alameda County Sheriff's Office canceled classes for the academy Wednesday following the death of a recruit. Instead of class, they offered grief counseling support for the other recruits.

"It is definitely not business as usual today," said J.D. Nelson with the sheriff's office. "It is difficult for some to work after one of their academy mates is no longer here."

Those he served with said they'll remember his passion to be great.

"He joked about his family wanting him, 'hey why aren't you becoming a doctor?' and we just laughed about that but being a soldier, serving the country, and the state and then to be able to serve the community as a deputy in law enforcement was something he really wanted and something he was driven about," says Alvidres.

CHP is asking anyone with information to contact them - especially if your car has cameras on it.

"Do us a favor and review your footage," Gonzalez said. "See if you notice anything with your video cameras that can help us with this case."

The Alameda County Sheriff's Charitable Foundation has opened an account at the Police Credit Union. The sheriff's office says all donations will go to David Nguyen's family.