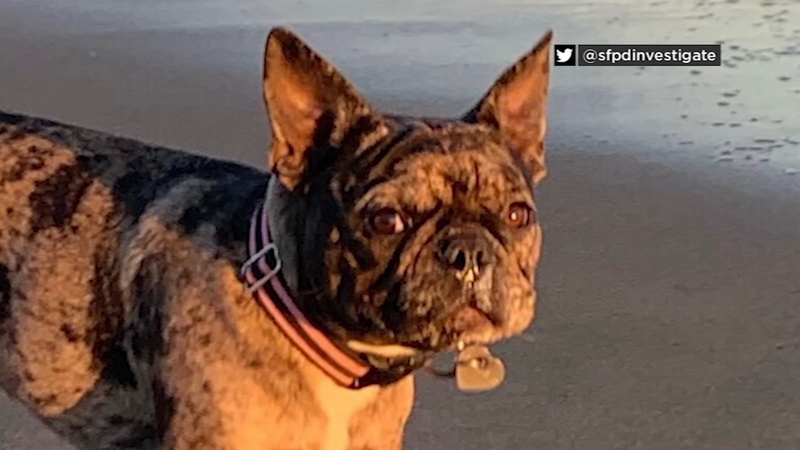 5 tips to prevent your French bulldog from getting 'dognapped'

SAN FRANCISCO (KGO) -- Members of the French bulldog community say they have seen more violent thefts of these dogs in the Bay Area.

A number of notable thefts in San Francisco have gained attention in recent months.

The latest, a Frenchie named "Rosie" who was snatched while on a New Year's Day walk in San Francisco's Marina district, was reunited with her owner earlier this week with the reward of $10,000 claimed, no questions asked.

Last January, San Francisco resident Sarah Vorhaus had her French bulldog, Chloe, violently stolen at gunpoint while on a walk in Russian Hill. Chloe has still never been found.

San Francisco Police Department says they don't have the exact number of attacks on French bulldogs but anecdotally victims have been robbed of this breed more than any other breed.

Investigators believe that the breed is targeted in these thefts because they are considered high-value ticket items.

Outside of the Bay area, similar violent thefts have also come into focus.

In Los Angeles, Lady Gaga famously had two of her three French bulldogs snatched while out on a walk. Her dog walker suffered a gunshot wound in the altercation.

These thefts often take place in connection with the value associated with French bulldogs, the cost of one run upwards of $4,000.

"It takes artificial insemination and even if you have a litter, French bulldogs don't give birth naturally, it's all done by cesarean. They could but it is very, very dangerous for a French bulldog to do that and that is probably the biggest reason why they cost so much," says Jaymar Del Rosario, owner of Got Frenchie, a Northern California French Bulldog breeder.

People often reach out to Del Rosario for help to find their lost and stolen dogs. "Because we specialize in the Bay Area and Sacramento and are a big part of the dog community here, I get several requests every month to help get the word out on stolen and lost dogs."

Private investigators say they too have noticed the rise in violence used when stealing dogs.

"It is definitely a new trend. "Stolen dogs are being targeted because of their breed and their value," Darrin Giglio, the chief investigator at North American Investigations, told ABC7 News. "Just like someone being targeted for their expensive piece of jewelry or their cell phone - unfortunately, because these dogs are valuable, people are willing to use violence to get them."

Giglio who investigates stolen pets as part of the work he does, have these tips for French bulldog owners on how to prevent an attack.

TIP #1: Make sure your dog is microchipped

Microchips are a painless and reliable way to ensure your dog has permanent identification and greatly increases the odds of a dog returning home if they get lost or stolen. The Humane Society recommends microchips as an extra level of protection in the event your pet's collar and tags come off. Providing your pets with both tags and a microchip can help ensure a happy reunion if the unthinkable happens.

TIP #2: Have detailed photos of your dog

Calling the police to file a report will help start an official paper trail of a theft and would eventually make it easier to retrieve your pet. Lost pet services such as Home Again are also options where alerts that include pictures of lost pets are sent out to shelters, vet clinics and pet owners. Detailed descriptions and photos of your pets can help anyone who come into contact with them recognize they are lost or stolen.

TIP #3: Take note of any special distinguishing marks and characteristics

California based Heartland Veterinary Clinic says tattoos have a very good success rate of returning lost pets to their owners. On their website, they recommend permanent forms of identification such as microchipping and tattooing.

"Because a tattoo can only be performed under general anesthesia, your puppy's neuter date is the perfect time to consider having this done. He will be given a small tattoo in his right ear when he is sleeping. The tattoo is composed of a combination of three to seven letters and digits. This set of letters and numbers is specific to your dog; no other pet in the province will have the same combination of characters. If your pet is found and taken to a veterinary clinic or a humane society, the staff will be able to trace the tattoo back to the clinic that originally placed the tattoo."

According to Giglio, walking an expensive dog in desolate areas late at night can be risky and something pet owners should re-consider as part of being situationally aware when out on walks.

TIP #5: Do not geotag your location on social media.

Part of the joy of owning a beautiful Frenchie is sharing with the world the fun things you do with your pet. However, these could be used to track your whereabouts and to glean information on the value and look of your dog.

"A lot of people are sharing pictures of their beautiful dogs and bragging about their dogs and talking about the values. That's information that the bad guys can look at and then you become a potential victim," Giglio says. "The more things they know about you on social media - about your dog or where you live or your town or you start posting and tagging places that you go to like restaurants and the gym, the more information they have to utilize to grab the dog."