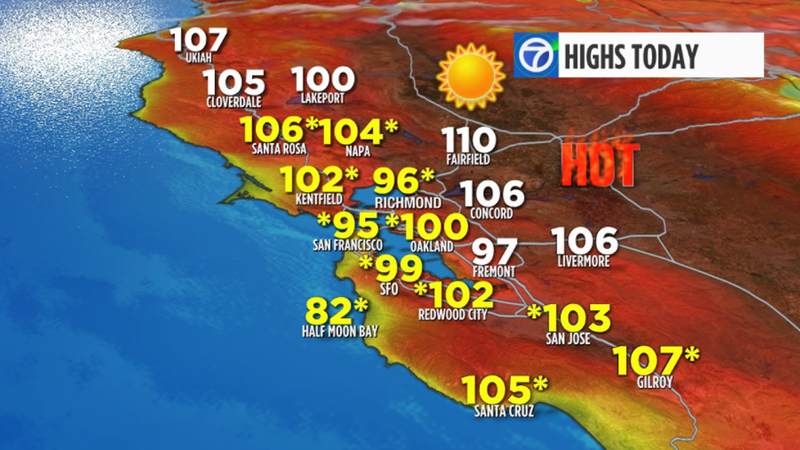 SAN FRANCISCO (KGO) -- It was a dangerously hot day across the Bay Area on Friday, as several cities hit record highs.

RELATED: Stage 2 emergency declared due to higher demand for power amid heat wave

The National Weather Service added San Francisco to its list of cities under a Heat Advisory on Friday as the Bay Area braced for day two of a record-breaking heat wave.

An Excessive Heat Warning will be in effect from 11 a.m. Friday to 9 p.m. Sunday.

Pay attention to your body. Each day it becomes more vulnerable to heat exhaustion and heat stroke.

"In fact, the only place in the Bay Area immune to moderate-to-high heat illness risk is the coast," said Nicco.

The Centers for Disease Control and Prevention says "those at greatest risk for heat-related illness include infants and children up to four years of age, people 65 years of age and older, people who are overweight, and people who are ill or on certain medications."

"We have a touch of humidity out there, which makes it even more dangerous because it's harder for your body to cool down," said Nicco. "That humidity is going to start to sliding away, later on tonight and tomorrow, but the heat will remain and as long as that humidity is around we have a slight chance of an isolated thunderstorm. The best chance is going to be over the ocean."

Although Friday is expected to be the hottest day of the heat wave, 100-degree temperatures are expected to continue for days to come.

"Heat warnings will likely be extended through next week, as the heat will hang around for the next seven days," said Nicco.