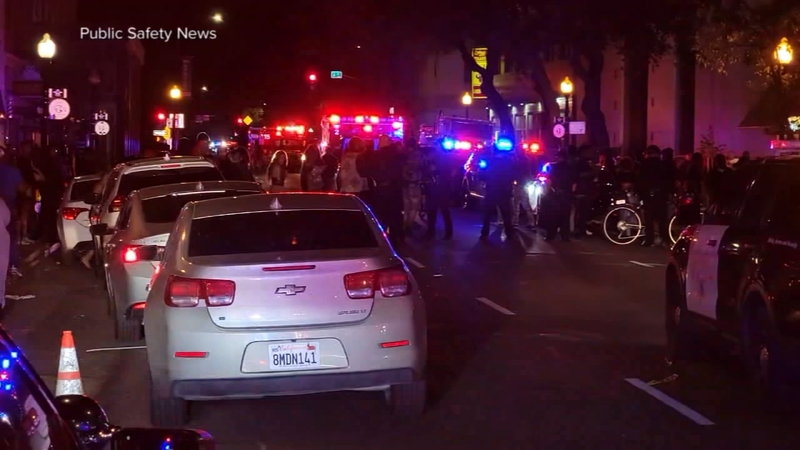 Sacramento shooting suspect was released from prison in Feb.

SACRAMENTO, Calif. (KGO) -- Sacramento police have arrested a third person in connection to Sunday's mass shooting, and now we're learning one of those three suspects was just released from prison.

Six people were killed during the shooting and at least 12 others were injured by bullets.

27-year-old Smiley Martin is one of three suspects, including his 26-year-old brother Dandrae Martin. Both are in custody right now in connection to Sunday's shooting.

"Smiley Martin and his brother, we believe, were together during this incident," said Sgt. Zach Eaton of the Sacramento Police Department.

Dandrae was in front of a judge for the first time Tuesday facing assault and illegal firearm possession charges.

Smiley, who was shot during the incident, will be booked into the Sacramento County Main Jail when his medical condition improves. He is no stranger to the law.

The California Department of Corrections and Rehabilitation confirms that Smiley was released a little more than a month ago, in February of 2022 after serving nearly five and a half years of a ten year sentence.

Witnesses recount the terrifying moments early Sunday morning where six were shot dead and 12 injured on the streets of downtown Sacramento.

The CA Department of Corrections and Rehabilitation says:
"Smiley Martin, 27, was received by CDCR in January 2018 from Sacramento County with a 10 year sentence for corporal injury and assault likely to cause great bodily injury. Prior to reaching a CDCR facility, Martin had already received 508 days of pre-sentencing credits, and received a variety of additional post-sentencing credits. He was released to Sacramento County probation in February 2022."

Smiley's past convictions including robbery and assault with a deadly weapon. Now he faces gun charges, including being in possession of a machine gun.

The Sacramento District Attorney office was so concerned about Smiley's release, they wrote the parole board last year saying he "has little regard for human life and the law."

Smiley's release was then denied. But this year, with pre-sentencing credits, authorities say his sentence was completed.

"I think the question is going to be asked here, 'what level of supervision, if any, was he under when he was released from prison?'" said legal analyst Steven Clark. Clark says it's possible lawmakers will now take a closer look at the prison credit system.

"They're going to look at this as, 'should they go back and tinker with the prison credit system so that there are certain people that do not get out this early?' I think it's too early to point fingers at any one governmental entity here, but it's questions that need to be answered, particularly when you look at the carnage that occurred in downtown Sacramento," said Clark.

None of the three suspects linked to the case face homicide or murder charges. Police say that could change, as they are sorting through more than 170 videos and going through evidence.