Fire that shut down I-880 in Oakland fully contained, officials say; all lanes now open

Crews fully contained a massive fire in West Oakland that closed both directions of I-880 due to smoke on Monday, officials say.

OAKLAND, Calif. (KGO) -- All lanes are now open on the freeway connectors that were closed Monday morning by a fire in a homeless encampment under the Interstate 880 overpass near the MacArthur Maze in West Oakland.

The fire broke out at about 10:30 a.m. near Wood and 34th streets near the Emeryville border and quickly engulfed dozens of vehicles, including at least 20 cars and several RVs that were parked under the freeway.

Heavy smoke from the fire was blocking nearby freeways and westbound I-80 to southbound I-880 was shut down and motorists were being diverted to the Bay Bridge toll plaza. The eastbound I-580 connector was also shut down, according to the California Highway Patrol.

The chief said firefighters were forced to battle the fierce blaze downwind and had to deal with extremely toxic gasses and fumes.

The Oakland fire department says the stretch of land along Wood street between 18th and 34th is a notorious crisis zone, a hotbed of constant fire activity because of the sheer number of RVs and cars and homeless encampments.

RELATED: Several displaced, dog killed in fire under I-880 in Oakland

Oakland fire officials say from Spring of 2021 to Spring of 2022, there were 90 fires in the area of varying severity, most on railroad or Caltrans property under the freeway. There was a fatality in one blaze just a few months ago.

About 65 firefighters were needed to fight the blaze which was extinguished by about 2:15 p.m. The California Highway Patrol announced that the freeways were once again open to traffic.

At this point in the investigation, there were no injuries or deaths. Officials said the area of origin appears to be right under a burned out train truss in part of a homeless camp.

The Bay City News Service contributed to this story. 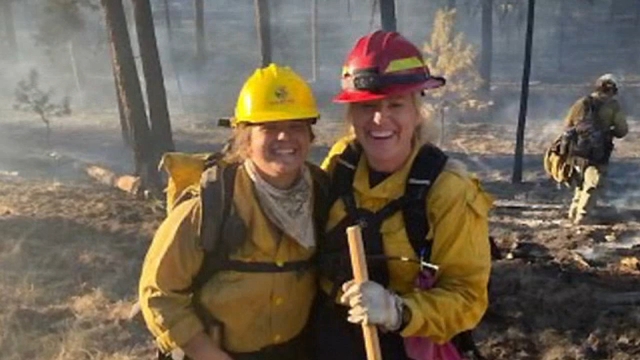