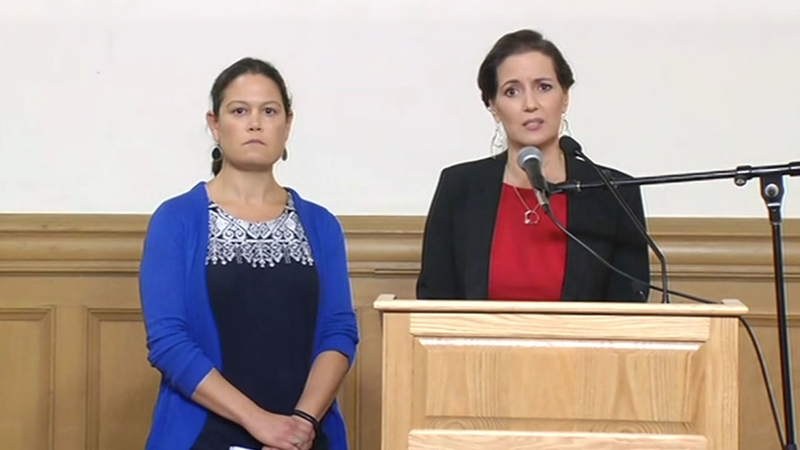 Oakland's top cop Paul Figueroa out after 2 days on job

RELATED: New OPD acting chief promises to restore trust amid sex scandal
Her announcement was startling, in a week that has already seen a parade of top cops come and go at the Oakland Police Department.

"We want to announce we are close to the end of an investigation of racist text messages. We think it's relevant to share the text messages were sent by African-American officers, but they are wholly inappropriate and not acceptable from anyone who wears the badge for Oakland Police Department," Schaaf said.

.@LibbySchaaf "I am here to run a police force, not a frat house..." @oaklandpoliceca pic.twitter.com/7sCNSzT4E1

Schaaf officially put the city administrator Sabrina Landreth in charge of OPD, the fourth person named to lead the department in eight days, as the acting chief Paul Figueroa stepped down after only two days on the job.

"I feel like this is an appropriate time to place civilian oversight to this police department and to send a clear message of how we are not tolerating misconduct, unethical behavior and to route out what is clearly a toxic macho culture," she said. "I'm here to run a police department and not a frat house."

The investigation into the alleged trafficking of underage sex by officers, perhaps with the knowledge of superiors, has exploded to include other police agencies and even the district attorney's office.

One city council member is trying to keep all the mounting allegations in perspective.

"I still believe the vast majority of our officers serve with honor and integrity in a very difficult climate," said city councilwoman Lynnette Gibson McElhaney. "For me, it's been difficult to think how do we recruit at a time like this."

And urgent search is underway for a new police chief who can deal with it all.

Another scandal in the beleaguered department involves a veteran Oakland homicide investigator. He's been accused of allowing his mistress to access his files and even write police reports.

The East Bay Express identifies him as Sgt. Mike Gantt. He's being investigated by the Alameda County district attorney.

His girlfriend became angry when she found out he was married and posted case evidence left at her house on social media.The district attorney has not said how many cases that Gantt investigated could be affected.

It's been a tumultuous eight days in the Oakland Police Department. Chief Sean Whent resigned June 9 in the midst of a widening sex scandal involving his department. That day, the city announced Ben Fairow, the Deputy Chief of BART's Police Department, would become interim police chief.

Just six days later, on Wednesday, Schaaf fired Fairow after she became aware of an affair he had while working previously for the department.

Assistant police Chief Paul Figueroa then took over. But now Figueroa has stepped down and is out on leave. He is asking to return from leave with the rank of Capt.

Protesters Friday called for OPD to release the names of all officers who knew about the sexual misconduct scandal but did nothing about it. The case involves officers having sex with an underage girl.

"OPD is rotten to the core and the officers responsible for in rape of this child or the exploitation of this child once she turned 18 all need to be held accountable," said Cat Brooks of the Anti Police-Terror Project.

The protesters said they want to help the city find the next chief of police.

#BREAKING @LibbySchaaf on her @oaklandpoliceca "I will root out this toxic macho culture..." @Oakland pic.twitter.com/TnAoiGpevW