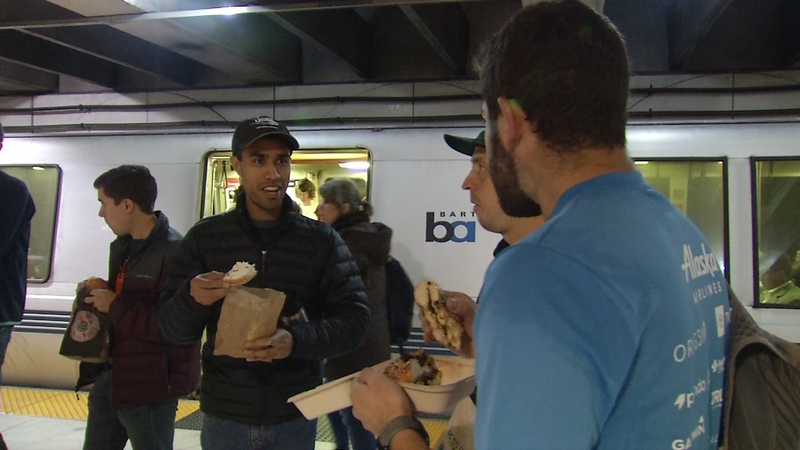 SAN FRANCISCO (KGO) -- A man detained this week by BART Police for eating a sandwich on a train platform, is sparking some outrage with the public.

Many have seen the incident that was caught on tape.

ABC7 News first brought you the story on Friday. On Saturday, some gathered to protest the incident by eating their own sandwiches on BART property.

"I've got my lunch here, it's very threatening as you can see," said JJ Naughton from San Francisco.

There was a defiant lunchtime eat-in on the platform inside the Embarcadero BART station, where eating isn't allowed.

"My first political awakening was back at a lunch counter in the '60s, now we're back to 'eat-ins," said John Reimann from Oakland.

About 30 people gathered for lunch to protest an incident recently captured on cellphone video at the Pleasant Hill BART Station.

Steve Foster of Concord says he was detained, even handcuffed by a BART Police officer, because he was eating a sandwich while waiting for a train.

"I'm definitely upset, mad, a little frustrated and angry about it," said Foster.

BART says state law prohibits people from eating or drinking in the paid portions of the station.

Law or not, Kelly Groth was passing out breakfast sandwiches in the station Saturday for what she called brunch on BART.

"People should be able to eat on the platform without getting harassed," said Groth.

"I wanted to make sure I showed up and ate on the plaza which I've done hundreds of times before to show what they did to us was embarrassing for BART Police," said John Jacobo from San Francisco.

"To me, I have no doubt this guy was treated differently because he is a young black man," John Riemann added.

BART Board of Directors member Janice Li was also here and brought her own lunch. Li believes there are bigger issues to deal with.

"I realize some things are illegal with our penal code, but I want to be mindful of how we're using resources to enforce our system," said Li.

The full video shows that Foster did insult the officer and used a homophobic slur.

In a statement, BART said about Foster: "He was not arrested.. he was cited for eating which is a violation of state law. The man was lawfully handcuffed after refusing to provide his name multiple times, once he provided his name he was cited and released."