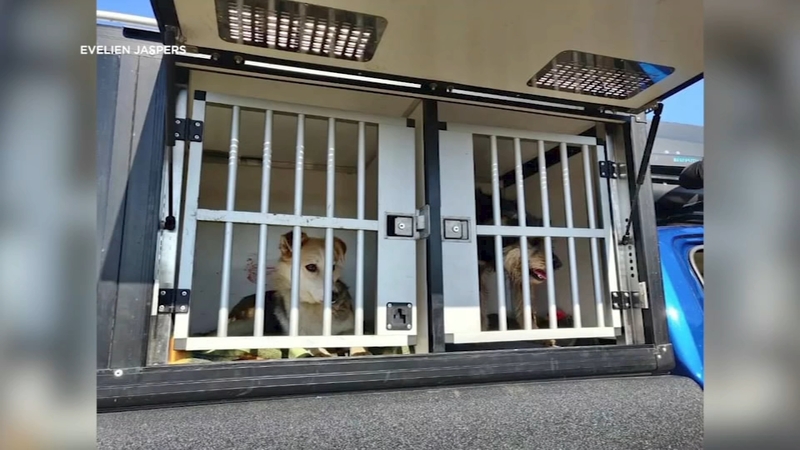 SAN FRANCISCO (KGO) -- Dozens of dogs are being evacuated from Ukraine by one of the world's best sled dog racers, after Poland's Igor Tracz took to social media to offer up his help.

"I posted on Facebook, 'Hey if somebody needs my help, I have special trucks perfect for dogs that need to be evacuated from Ukraine,' and the next day I am gone," said Tracz, who's leading the way alongside close friends and neighbors rescuing dogs left in the shadows of war.

"Sometimes we're transporting injured dogs." said Tracz. "One time, we transported a dog without legs after a bombing. We tried saving him but we lost him."

They've managed to save roughly 250 dogs and cats while also delivering 60 tons of food and supplies to shelters and individuals in need.

And helping to keep the efforts going is one Bay Area resident with a big heart for dogs.

"I had a business for over 25 years in San Francisco," said Jenny Test. "I had doggie daycare and a dog training facility. I just love dogs."

An American veteran from the Bay Area is coming home after spending a month in Ukraine to join the fight against the Russian invasion.

When Test saw what was going on in Ukraine, her instinct was to get over there to assist, but a battle with chronic Lyme disease nearly stole her life and put her on the sidelines.

"I experienced an illness not long ago that prevented me from really doing search and rescue work anymore, and so I called Igor," said Test, noting from there she started organizing a fundraiser to raise money to cover the cost of fuel for the convoys.

"The fundraiser is to keep him on the road. He's got shelter on wheels because of what he does in the World Championships," said Test. "Sponsors are giving free dog food - it's just perfect and I really want to keep him moving."

As for Tracz, he spoke with ABC7 from France, where he just won his eighth world championship and will soon be back to the rescue in Ukraine.