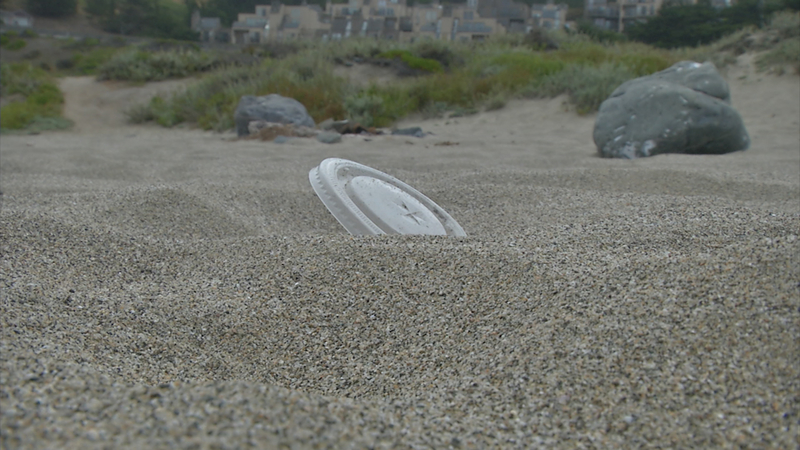 Plastic waste is one of the leading causes of pollution and, increasingly, cities are around the Bay Area are stepping up to ban plastic waste. San Francisco's legislation went into effect July 1. But do bans work?

SAN FRANCISCO (KGO) -- Plastic waste is one of the leading causes of pollution and, increasingly, cities are around the Bay Area are stepping up to ban plastic waste. San Francisco's legislation went into effect July 1. But do bans work?

Earlier this month in Pacifica, volunteers combed the beach looking for garbage for an hour. A lot of what they found were tiny pieces of plastic from items we take for granted every day.

"We see too many straws still, we see lots of bottle caps, lots of plastic bottles," said Lynn Adams, Director of the Pacific Beach Coalition.

Adams oversees beach cleanups along the Bay Area coastline. In just one week this June, she picked up 353 pounds of trash on the San Mateo coast, much of it made of plastic.

"You know, there are more wrappers," she said. "Everything has to be wrapped and packaged and there is more single-use plastic then there ever was, so yes it is worse in that regard."

The California Coastal Commission says plastics are one of the biggest pollutants found during their annual beach cleanup day every September. Volunteers pick up about a million pounds of trash, 80 percent of that waste comes from land.

"And that's in three hours," said Eben Schwartz, manager of the Marine Debris Program for the California Coastal Commission.

Schwartz is with the commission.

He says plastic waste found along the state's 1,200 miles of coastline is impacting everything in the ocean.

"Those single-use plastics get out into the environment, they break into smaller and smaller pieces and they pollute our food chain," he said. "They are being ingested at every level of the food chain."

Plastic is killing sea life and poisoning the food we eat.

RELATED: More waste is going to landfills, less is recycled. What's going on?

"We are about to embark on a journey with our residents and our businesses to tackle plastics and specifically single-use plastics," said Debbie Raphael, Director of the San Francisco Department of the Environment.

The World Economic Forum predicts that by 2050, there will be more plastic in the ocean than fish.

"We understand that our oceans are full of plastic right now, and we know that if we want a future, where there are more fish than plastic in the ocean, we're going to have to do something about it," said Raphael.

Starting Jan. 1, all straws and food containers sold in San Francisco must be biodegradable.

Plastic bans have proven to work at reducing waste. San Francisco was the first city in the nation to ban plastic bags in 2007. In 2016, voters approved Proposition 67, banning plastic bags statewide.

Since then the number of bags that have turned up on Bay Area beaches has dropped dramatically.

"Bags were typically among the top 10, even among the top 5 items we were picking up every year," said Schwartz. "When local plastic bag bans went into effect, we started to see a steady drop in bags we were seeing on coastal cleanup day."

Plastic bags used to make up 9 percent of the total waste picked up on that day, that's dropped to just over 1 percent. Environmentalists are hoping these new plastic bans will do the same for other plastics.

Back in Pacifica, the beach is cleaner than it was this morning.

"I didn't see any plastic bags today," said Adams. "Which is a really good thing, so the ban did make a big difference for that."

Adams is hopeful that will soon be the same case for other plastic garbage too.