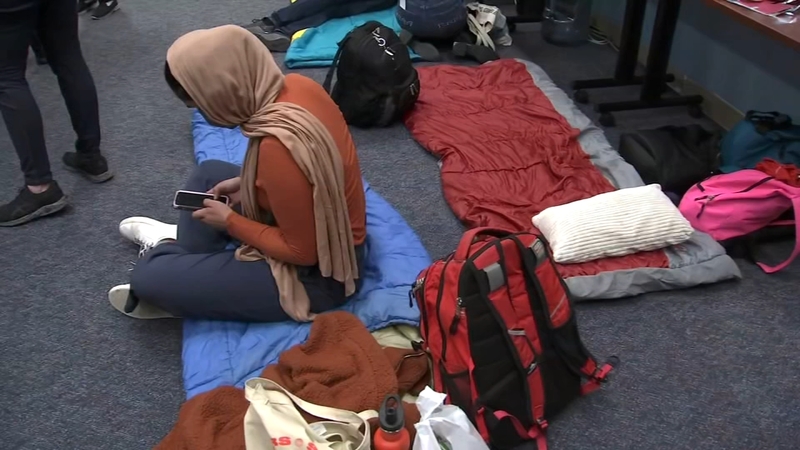 SAN FRANCISCO (KGO) -- As of late Monday night, a couple dozen educators and union representatives were camping out in the district offices of the San Francisco Unified School District.

Those educators are demanding unpaid paychecks, saying they want their money.

"Let me start with an apology, an apology to anyone who has had a delay in their check. There is no way that should happen. I hold myself accountable," said Superintendent of the San Francisco Unified School District Dr. Vincent Matthews.

Matthew's apology to educators came just minutes after the teacher's union set up camp outside of his office -- Literally, sleeping bags outside of his door, demanding that unpaid teachers like Rebecca Fedorko get their money.

"I think I'm owed about $2,000 or so. It's because there's all these issues with the new payroll system they didn't create new codes for things," says Fedorko who is a special education teacher.

VIDEO: Mayor Breed 'proud' of 3 women replacing SFUSD board members who all have kids in the district
EMBED More News Videos

Ann Hsu, Lainie Motamedi, and Lisa Weissman-Ward will serve out the remaining terms of the three recalled SFUSD board members.

The COVID code for additional paid sick days is one of those problems. Substitute teachers not getting paid for work at different schools, pay for those working after-hour programs, and no access to health care or retirement benefits are all major issues.

As camp was setup inside district headquarters, educators walked picket lines outside, and then a back-and-forth between the union and the superintendent.

"Yeah 900 dollars doesn't seem like a crazy amount, but when you're living paycheck to paycheck in the Bay Area, 900 dollars is child care for the week," says Fedorko.

"This is not a software issue, this is a problem from the decisions made from the very top management and continue to persist into March," says Cassondra Curiel, who is president of the United Educators of San Francisco.

Dr. Matthews says 15 additional people have been brought in recently to help with the problems and since last Friday 600-700 additional payments have been made.

"We're trying to get dollars in people's hands right now. There is no way that any of you should have had to come down here with sleeping bags to say, 'pay us', that shouldn't happen and as I said, as the person who is the head of this system if things go wrong I'm the head of the system and I should be held accountable," said Dr. Matthews.

As of late Monday night those with the United Educators of San Francisco tell ABC7 News they are meeting with school board members but will be staying at district headquarters overnight as they are still awaiting checks.