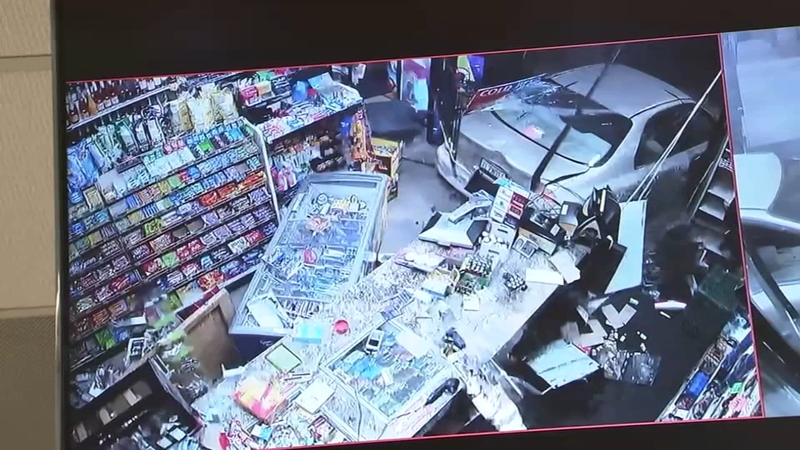 SAN JOSE, Calif. (KGO) -- The search is on for a group of criminals who caused tens-of-thousands of dollars' worth of damage to six small businesses across San Jose.

Surveillance footage from early Tuesday morning shows one man, seemingly casing the outside of Branham Wine and Liquor in south San Jose. Seconds later, the video shows a sedan ramming through the storefront.

"They hit with the car and break the two windows," owner Jimmy Singh told ABC7 News. "They took the ATM machine."

Singh is just one of several small business owners across the city whose storefronts were smashed in the early morning, 90-minute crime spree on Tuesday.

SJPD told reporters the crooks used different vehicles, but acted in concert as they hit six separate locations. In all, SJPD said the criminals also either burglarized or attempted to burglarize the following locations:

"The first burglary was reported a couple of minutes after 3 a.m., the last one was reported shortly after 4:30 a.m.," SJPD Sgt. Christian Camarillo explained. "This occurred all over the city, from the south part of the city, into downtown, towards the north end of the city."

In total, SJPD said the criminals got away with one money machine, and were able to break open a second. Police didn't confirm how much cash was inside.

A man who prosecutors say was part of a group burglary at a high-end sneaker store twice last year was arraigned in Santa Clara on Tuesday.

SJPD said thieves were thwarted by security measures already in place at many locations.

However, Branham Wine and Liquor cameras caught the suspects struggling to get the ATM loaded onto the bed of a pick-up truck.

"They destroyed my business almost," Singh shared. "Because the ATM machine has no money in there, maybe $500... a thousand you can say. But it's not that much."

Elsewhere, there was clear damage of Tuesday's criminal activity.

Cameras at Santa Clara Smoke Shop in downtown caught an SUV reversing into the business. The shop owner didn't want to go on-camera, but shared surveillance footage and confirmed he doesn't even have an ATM inside the store.

Instead, the owner said those responsible caused $15,000 to $20,000 worth of damage, and got away with a couple hundred dollars' worth of clothing.

"These criminals were very busy for about an hour and a half in our city," Sgt. Camarillo told ABC7 News.

As of late Tuesday, the suspects also remained at large.