Green's lawyer says at the hospital he was handcuffed to his bed and was refused the right to speak with his family.
KGO
By Dustin Dorsey 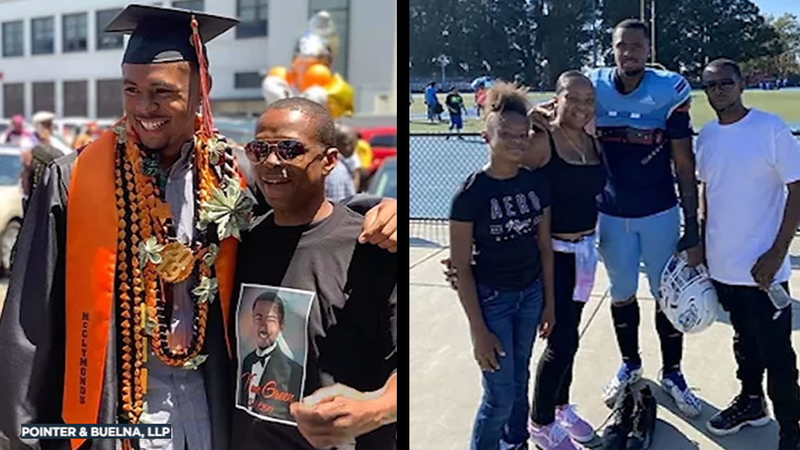 SAN JOSE, Calif. (KGO) -- As K'aun Green continues to recover from injuries he suffered after being shot by a San Jose Police Officer, his family and legal team announced they are suing the City of San Jose and SJPD for the events that transpired. Green wrestled a gun away from another man during a fight just before he was shot.

He suffered injuries to his arm, stomach and leg after being hit four times.

"I try to stay strong for my mom, for my pops, for my whole family," Green said. "I refused. I refused to die."

Mentally and physically in pain, Green shared the struggles he is facing for the first time after being shot on March 27.

Surveillance video showed that Green disarmed another man during a fight his lawyer said someone started with him.

One man attempted to punch Green while another man brought out what police called a ghost gun to defend the man against Green.

After obtaining the gun, lawyers say Green attempted to deescalate the situation and leave the restaurant when one officer shot him while still holding the gun.

His lawyers said he was rushed to the hospital where he was handcuffed to his bed and refused the right to speak with his family.

A San Jose officer is on administrative leave after shooting 20-year-old Kaun Green, who disarmed a gunman inside at La Victoria Taqueria.

Green and his lawyers announced they filed a civil rights lawsuit against the city for the actions that occurred that night.

"The city of San Jose and the San Jose Police Department here to for have failed to treat my client, K'aun Green as the person he is, which is a hero," Green's lawyer Adanté Pointer said.

"We're still devastated because he has a future ahead of him," Green's father Antwan Green said. "Well, he had one, but we don't know how that's going to go for him."

The 20-year-old sophomore football player at Contra Costa College says he has received scholarship interest from several schools including San Jose State and Fresno State among others.

Doctors say his recovery could take anywhere between 6 to 10 weeks.

He's unclear when he can return to training with his teammates and his family fears his future goals are now at risk after being shot four times.

"My son is a hero," Green's mother K'elea Thompson said. "My son is a loving, courageous, ambitious young man. He had dreams of pursuing a Division 1 college and going to the NFL. Now it has been set back from this tragedy and this nightmare."

As this lawsuit is set to play out, Legal Analyst Steve Clark says it will come down to two key questions: what would a reasonable officer had done and was deadly force necessary?

A San Jose officer found dead in his home is said to be 24-year-old former SJSU football player DeJon Packer, a graduate of SJPD academy in 2021.

"It's easy to draw the conclusion because Mr. Green was the one shot and he turned out to be the hero in this situation that San Jose PD must be at fault," Clark said. "But it is going to come down to, was their action reasonable based on the entirety of the circumstance and the fact that he had a gun at the point that he was exiting the taqueria."

The city and police both said they are not able to comment on incidents pending litigation.