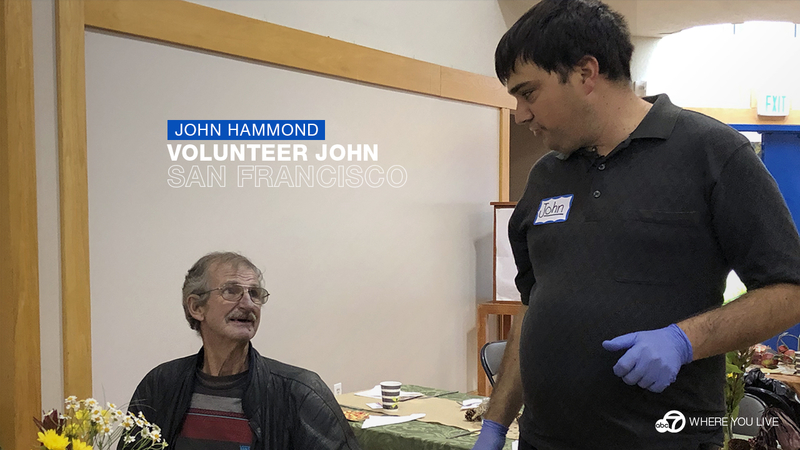 SAN FRANCISCO (KGO) -- At All Saints Episcopal Church, the mashed potatoes are scooped and cranberry sauce piled high for the after-Thanksgiving community lunch.

This is a place where old and young are patrons and volunteers. Girls as young as five-years-old hand out pie slices from a wheeled cart, while seniors and teenagers from all backgrounds apply fluffy white swirls of whipped cream.

Among them, buzzing around at a million miles an hour today-- a volunteer like no other.

"Do you want a drumstick if there's any extra? Do you want a bag lunch as well," says John Hammond as he approached a man with gray hair eating alone.

No less than two minutes after he hands the man a brown paper bag with a turkey sandwich inside, he's hunched over a homeless woman helping her get her place setting straight and ready to receive her meal.

John is the man affectionately dubbed "Volunteer John" throughout the Bay Area. Known for never being afraid to dish out instructions or ask questions, and always willing to lend a hand.

He is inquisitive, wanting to know the answer to everything, as witnessed when he asked the name of one diner's black and white dog before proceeding to proffer up a beverage to the patron. Eileen Richardson, CEO of Downtown Streets Team who puts on the after-Thanksgiving lunch noted his enthusiasm to be part of something bigger than himself and his attention to detail.

"He is amazing. I think he's done every single job that's here! One of the most important jobs we had was a woman who came in very late and said she knows of 100 people who need food. So John organized getting to-go plates and the silverware and everything and put them all together and wrapped them up in tinfoil. Now he's delivering them to the woman to bring them to those that are hungry today!"

John is also proud to be an ambassador with Best Buddies, an organization dedicate to empowering those with intellectual and developmental disabilities like himself.

Katelyn Quintero, area director for the Northern California chapter of this international non-profit has known John many years and considers him a best friend.

"John is so phenomenal. He's just like anyone else. He comes on strong but that's because he has so much energy and passion for the things he's excited to do."

For decades John has been volunteering with the USF Dons baseball team-at church-- for political campaigns-- professional volleyball tournaments and countless other events. Taking comfort being with people and making them smile.

"He goes to everything just because he loves being out in the world and in the community-- you'll see him. I'll go to places and he will know everybody," beams Katelyn who watched as John works the room to make everyone feel like they're special.

"He treated me really good," smiles another diner who proceeds to put the wrapped sandwich John gives her into a plastic bag to take home.

John's volunteer day is not over. Later that evening, beneath 8-million twinkling lights and light rain falling at California's Great America in Santa Clara, he's passing out maps to parkgoers. He wants to make sure everyone is greeted warmly despite the chilly less-than-ideal conditions.

"Merry Christmas guys, welcome," shouts John as he gives as many people as possible high-fives and tens.

John then caps off his night on stage with ABC7 News anchor Dion Lim to kickoff Winterfest by plugging in and illuminating a 65-foot tree for hundreds of guests.

His heart, passion and caring so obvious to everyone at Great America and everyone he encounters. Proving that a disability can really be, a very special ability.

Best Buddies programs positively impact almost 60-thousand people in California, with and without disabilities. If you'd like to get involved and help champion people like John, visit www.bestbuddies.org/california

Click here to meet more of the ABC7 Stars where you live.