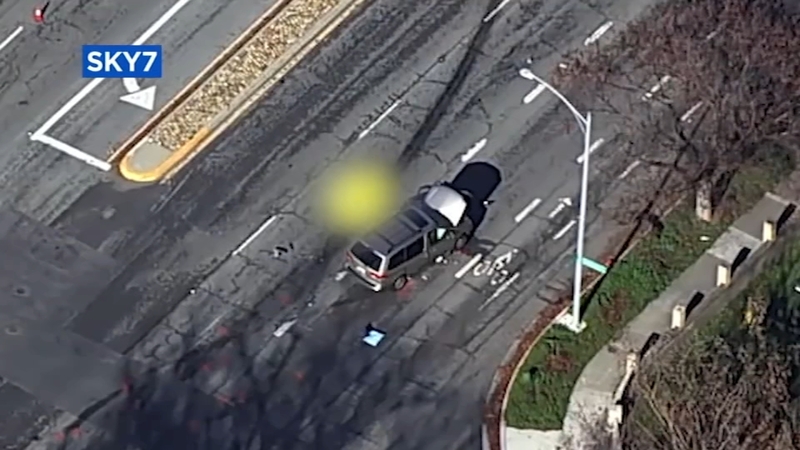 SAN JOSE, Calif. (KGO) -- California roads are more dangerous than ever since the COVID-19 pandemic began. As people have become more concerned with their health and safety, more people have turned to driving themselves than using public transportation.

Thousands of residents have lost their lives to traffic accidents since 2020 and officials say one factor can be most dangerous.

"Speed kills," San Jose Mayor Sam Liccardo said. "We are seeing significant number of these deaths resulting from those drivers who are speeding. We know if we can do something about the speeding, we can save lives."

Enter Assembly Bill 2336. The bill creates a five-year pilot program to allow select cities to use automated cameras to manage speed on their highest injury streets, in school zones and on streets with a history of speed contests and motor vehicle exhibitions of speed.

"I'm a proud joint author on this bill because speed kills in San Francisco and in cities all across California," Ting said. "That's why San Francisco has been trying to pilot traffic calming measures including traffic cameras by schools in particular."

Unlike traditional speeding tickets of $238, the cameras will read license plates to check speeds and automatically issue set fines of $50, $100, $200 or $500 in six California cities including San Francisco, Oakland and San Jose.

For those living under the poverty line will be offered an 80% reduction in that fine or community service, as well as a payment plan capped at $25 a month.

San Jose tied the all-time high number of traffic fatalities in 2021 and the city is now on a record pace of deaths in 2022.

Mayor Sam Liccardo says 55% of fatalities happen on 3% of the city's streets and these cameras will hopefully lead to reduction of speed on these dangerous roads.

"With automated speed enforcement, we can use technology that's widely used in 14 other states to be able to stop speeding and be able to discourage speeding even more importantly," Mayor Liccardo said.

The San Jose Police Department issued the following statement regarding the new bill:

"We welcome legislation and technological advances that can improve the safety of pedestrians, bicyclists, and motorists on the roadway. This proposed legislation, as written, would be subject to provided civil penalties, not criminal."

Meanwhile, privacy advocates raise concerns about factors like the cameras usage, enforcement and mass surveillance since the cameras are similar to red-light cameras.

"I think it's enticing for people who are concerned with public safety and often times see or experience speeding traffic on their street to want to do something about it," Oakland Privacy Director of Research Mike Katz-Lacabe said. "I think it's an open question to whether this is the thing that should be done about it that is going to be most effective."

If the cameras are not effective reducing speeding violations by 25% within the first 18 months, cities will have to start planning construction of traffic calming measures to slow cars down.

According to the bill: "Cities are prohibited from using the revenue to backfill existing expenditures on traffic calming measures, and if the city does not spend the money on engineering solutions within three years, the remaining revenue must be sent to the state for the Active Transportation Program to give other cities a change to build projects to enhance pedestrian and cyclist safety."