KGO
By Wayne Freedman
SAN RAFAEL, Calif. (KGO) -- It's not the kind of failure anyone would expect from the first significant rain of this season.

A roof collapse could have been much worse had it not happened before opening time at a HomeGoods store in San Rafael's Northgate Mall.

"Well they are lucky nobody was in there," said shopper Linda Henderson.

There were only two early morning employees inside at the time. They had already called San Rafael Fire to report a leak.

Little did they know, what appears to have been a clogged drain turned the flat roof into a seeping lake, increasing pressure. After firemen entered, they moved toward the back.

Merlon Geier Partners now says it is assessing issues and causes of #sanrafael @HomeGoods roof collapse and will get back with a statement. #abc7now pic.twitter.com/UfQxiM3jqr

Water, beams and metal collapsed into what would have been crowded check-out lanes just a couple of hours later.

That department is awaiting a full report, with nothing certain as of Monday afternoon.

"The rest of the roof is intact at this point. We don't know if it will collapse. It is unstable at this point," said Battalion Chief Hatfield.

The building is separate from Northgate Mall, where thousands of customers shop daily. The HomeGoods store is extremely popular among shoppers who would have never seen this coming.

"I am concerned about when their last inspection was," said customer Toba Sloan.

HomeGoods released a statement Tuesday, saying they are assessing damage.

Monday afternoon, Merlon Grier Partners, which owns the mall, said it does not anticipate more closures in the main building.

Merlon Geier Partners runs the mall and has referred calls to San Diego. No response, yet. What about roofs in the rest of Northgate Mall? Thousands of customers shop here daily. Had HomeGoods been open, roof would have collapsed on cashier area and customers. #abc7now pic.twitter.com/FTDp3VxabI

Rains arrive with a roof collapse at Homegoods store in San Rafael.
It is closed and red-tagged. No customers inside failure occurred. Good thing. @SRFD says this happened directly above cash registers. Fell with a crash. #abc7now #sanrafael pic.twitter.com/DJvoRtfGLg 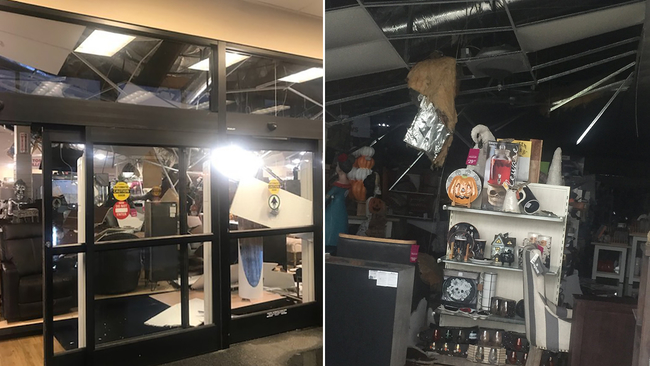