Sen. Warren: "Consumers are getting scammed left and right while using Zelle"
KGO
By Michael Finney and Renee Koury 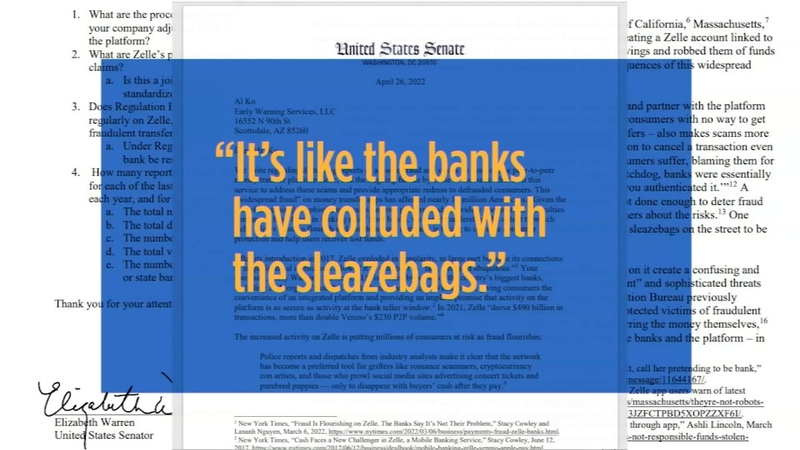 SACRAMENTO, Calif. (KGO) -- 7 On Your Side has been reporting about a widespread scam by bank imposters who trick their victims into sending them money through Zelle -- the popular quick-pay app owned by major banks.

Now two U.S. senators are demanding answers for what they call a disturbing rise in fraud on Zelle. They're demanding Zelle and the banks take action to stop it and help victims get their money back.

This is the first time federal lawmakers have publicly demanded that Zelle and major banks take responsibility instead of blaming customers for falling for scams.

Senators Elizabeth Warren and Robert Menendez say banks have provided Zelle to customers -- and now it's become a favorite tool for criminals to steal their money.

This is all happening as more and more victims are still coming forward.

"Literally, I just got paid that Friday and then Saturday, all the money's gone," said Samantha Bradford of Sacramento.

How are scammers able to take over your Zelle account -- all while sounding like a real bank employee? Here's how one woman found out, the hard way.

Bradford's story is all too familiar, but no less devastating.

"I did not deserve to be scammed because I thought it was Wells Fargo protecting me," Bradford said. "And they were not."

Bank imposters had just tricked her into sending them all her money through Zelle -- then the bank denied her claim.

Now, a flood of cases like hers has caught the attention of two U.S. senators who say the quick pay app has made it easy for fraudsters to steal money from their victims.

Senators Elizabeth Warren of Massachusetts and Robert Menendez of New Jersey fired off a letter to Zelle CEO Al Ko. They said Zelle's popularity is "putting millions of consumers at risk as fraud flourishes" and that "banks have chosen to let consumers suffer, blaming them" for getting duped.

Sen. Warren was even more direct in a Tweet. She tweeted: "Consumers are getting scammed left and right while using the money transfer app @zelle. And the worst part? Zelle's parent company and the big banks that own it are refusing to help Americans get their money back. I want answers."

Bradford does too. She was driving from her grandmother's home in Oakland when the text arrived on her phone. It said "Wells Fargo security" and asked if she'd made certain transactions.

"I replied 'No' because I was not making those transactions..." Bradford said.

Then came the call -- supposedly from Wells Fargo Bank. A man said someone was draining her account. She had to act fast. Bradford pulled over.

"And he's telling me to Zelle the money back to myself to protect it," Bradford explained. "And I say 'OK', 'cause I'm believing this is my bank."

She transferred every dime in her accounts -- $811 in all. She then received a receipt saying "Zelle reversal," so it seemed she was indeed reversing the fraudulent transaction and getting her money back.

Officials are warning about a scam that's taking advantage of unsuspecting victims who make electronic withdrawals from their bank accounts.

The bank denied her claim for a refund, saying she'd authorized the transactions, and Zelle has no fraud protections.

"For the bank to tell me, 'Nope, your fault ma'am'," Bradford said. "It's not my fault because I thought it was you. These people are impersonating you. It's not fair."

The scam was hitting others across the country.

"The money's gone. It's gone," said Cynthia Marin of Concord.

"My account was wiped out, zero balance," echoed Kelly Reynolds of San Jose.

"I went, 'Wow, I have been scammed,'" said East Bay resident and Chase customer Donald James.

"For you to say, 'Oh well, your money's gone. We don't protect Zelle.' Why? Why is my money here? Why are you even a bank?" Bradford asked.

The Senators are now demanding answers too. The letter notes that Regulation E of the Electronic Fund Transfer Act protects consumers duped into transferring money to fraudsters.

The Senators wrote: "The immediacy of money transfers makes Zelle a favorite of fraudsters... and alarmingly, both your company and the big banks... have abdicated responsibility... leaving consumers no way to get their money back..."

Quoting one consumer, the Senators said, "It's like the banks have colluded with the sleazebags ..."

The letter demanded to know: how Zelle is rooting out fraud, the number of fraud cases and why some victims get refunds but not others.

So far, no money back for Bradford.

Zelle's parent company Early Warning Services has told us it will respond to the Senators' letter "in due course," but gave no other response. As for Wells Fargo, it said it will consider each fraud claim individually -- and also said it is now warning Zelle users the bank will never ask customers to send money back to themselves.