1 injured after possible shooting shut down eastbound I-580 in Livermore, CHP says 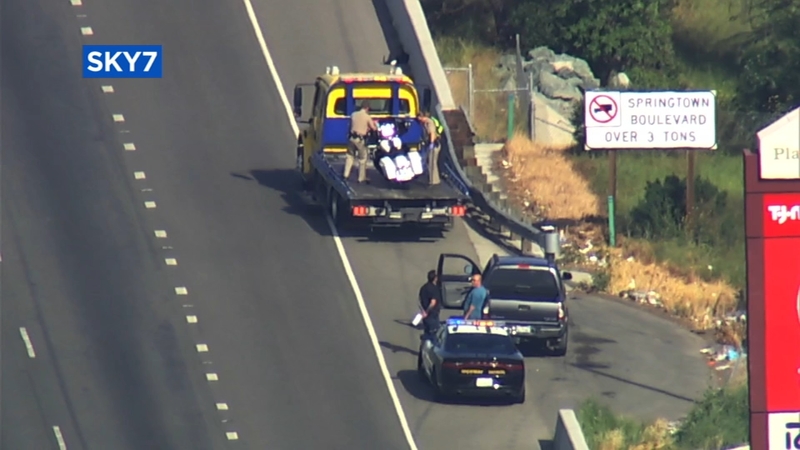 1 injured after possible shooting on eastbound I-580 in Livermore

LIVERMORE, Calif. (KGO) -- Interstate 580 going into Livermore was a mess during Thursday evening's commute, as all eastbound lanes were closed for nearly three hours.

Officers were investigating a possible shooting after a victim called in saying he had been shot in the arm.

A massive traffic backup could be seen along eastbound 580 in Livermore after CHP closed all lanes. It happened just after 2 p.m. when this report came in CHP's scanner channel:

"The party was on a Harley Davidson motorcycle he says he has no idea who shot him in the arm, but he got shot in the arm."

As our SKY7 chopper flew above, officers could be seen with the motorcycle as it was about to be towed. CHP confirms the victim was transported to the hospital with non-life-threatening injuries.

"He has a small-caliber bullet wound to his right forearm," is what one officer radioed in.

Those who live and work in the area were shocked to hear that.

"You don't see crime in the Tri-Valley. I mean if you're driving in Pleasanton, Dublin you don't see that over there," said Adriana Aguilar who works nearby but lives in Oakland.

Aguilar was driving westbound to Hayward when she saw officers walking in the closed eastbound lanes.

Georgette Thomason took side roads with her family members to get back to Livermore and nearly ran out of gas in the 90-plus degree weather.

"Before we stopped to get gas I was concerned so we had the windows down and the air off. My 16-year-old in the car was railing, 'Why do so many people have guns and why do they pull them out right away? And what could have happened to cause someone to shoot someone?' It's sad that it is happening closer to our town and more and more often these days," said Thomason.

CHP has not released a suspect description and no arrests have been made.

The Bay Area has seen dozens of highway shootings in recent years. Fortunately in this case, the victim is alive, sadly many other victims have died.